Add To Cart
$825.00
Finish selections for price & availability
Free shipping on orders over $150 in the US
Marathon
Re-Issue Stainless Steel GP Mechanical (GPM) 39mm
A Re-issue of the Marathon GG-W-113 field watch
Version
Email Me When Available
Item no longer available

Add To Cart
$825.00
Finish selections for price & availability
Free shipping on orders over $150 in the US

The Marathon Re-Issue Stainless Steel GP Mechanical (GPM) 39mm is based on the brand’s GG-W-113 field watch which was used in the ‘80s. Compared to many of its competitors, the Marathon was a bit odd in that it utilized a mechanical movement when many others went quartz. For the re-issue, Marathon kept much of the looks and utilitarian functionality intact but modernized the dial to their current standards.

The oddly shaped two-piece case has concave sides, giving it a far more sculptural appearance than is typically found on a field watch, adding to its charm. Coming in at 39mm, it wears smaller than expected thanks to the 44.25mm lug-to-lug and 16mm nylon band. The sapphire crystal gives a clear view of the dial which features a tried-and-true field watch design. Large hour numerals are surrounded by tritium gas tubes, which provide a steady endless glow in low-light situations, and don’t need an external light source to charge.

Inside of the Marathon Re-Issue Stainless Steel GP Mechanical is the Swiss-Made ETA 2801. A manual wound caliber it features 17-jewels, hacks, has a power reserve of approximately 42 hours, and a frequency of 28,800 bph. 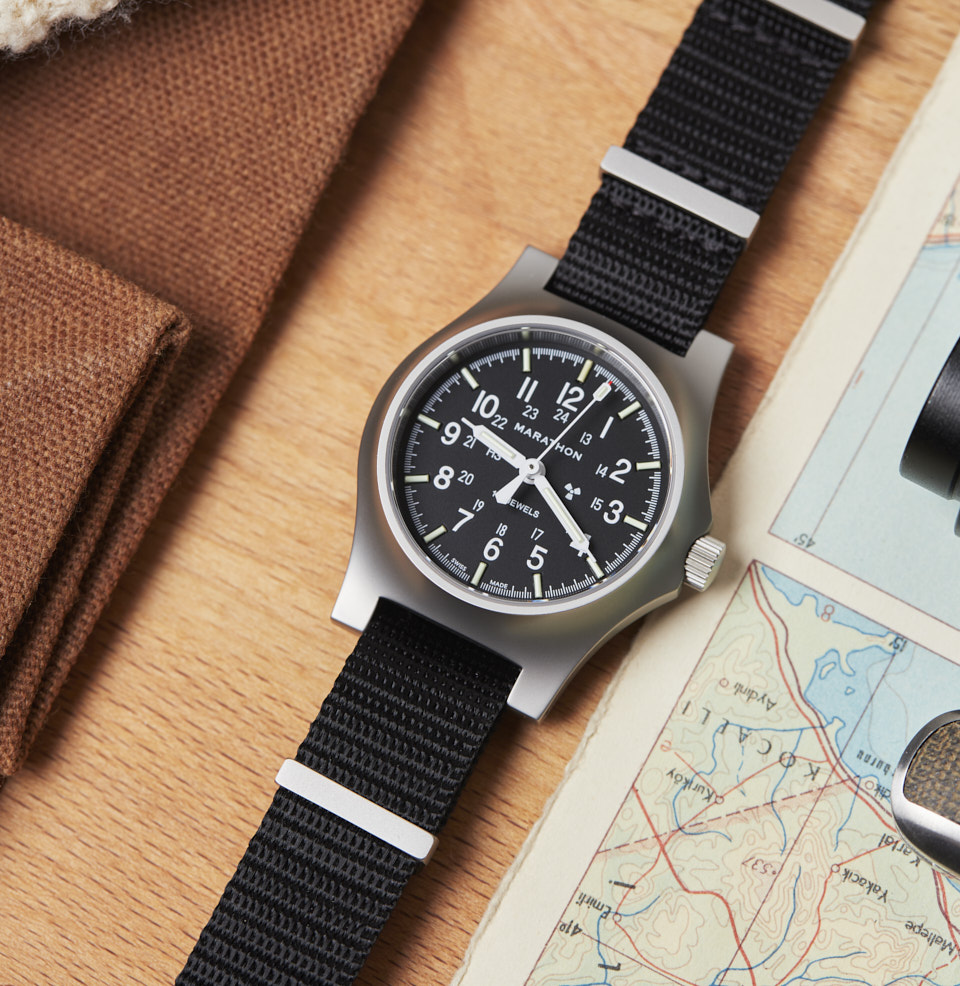 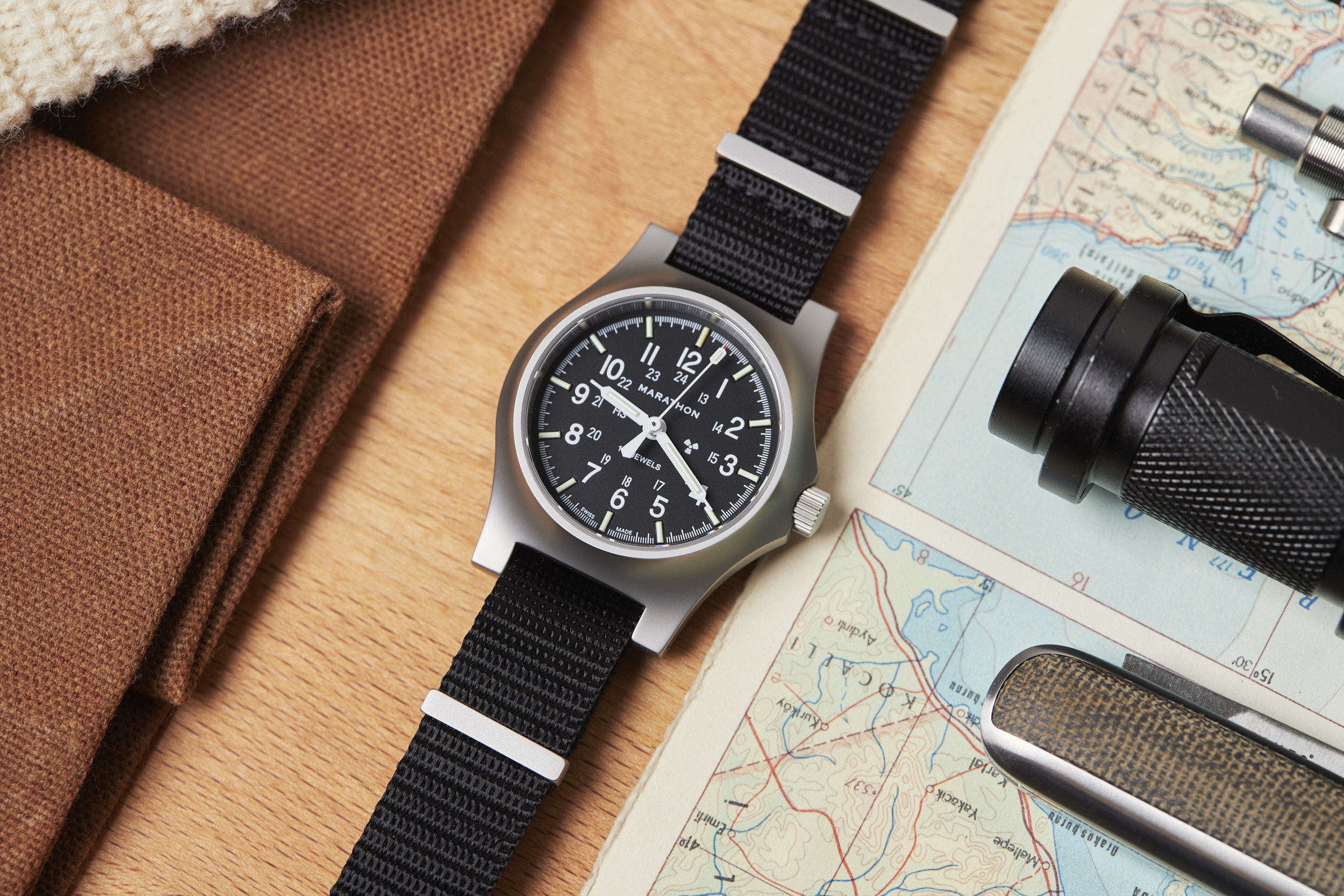 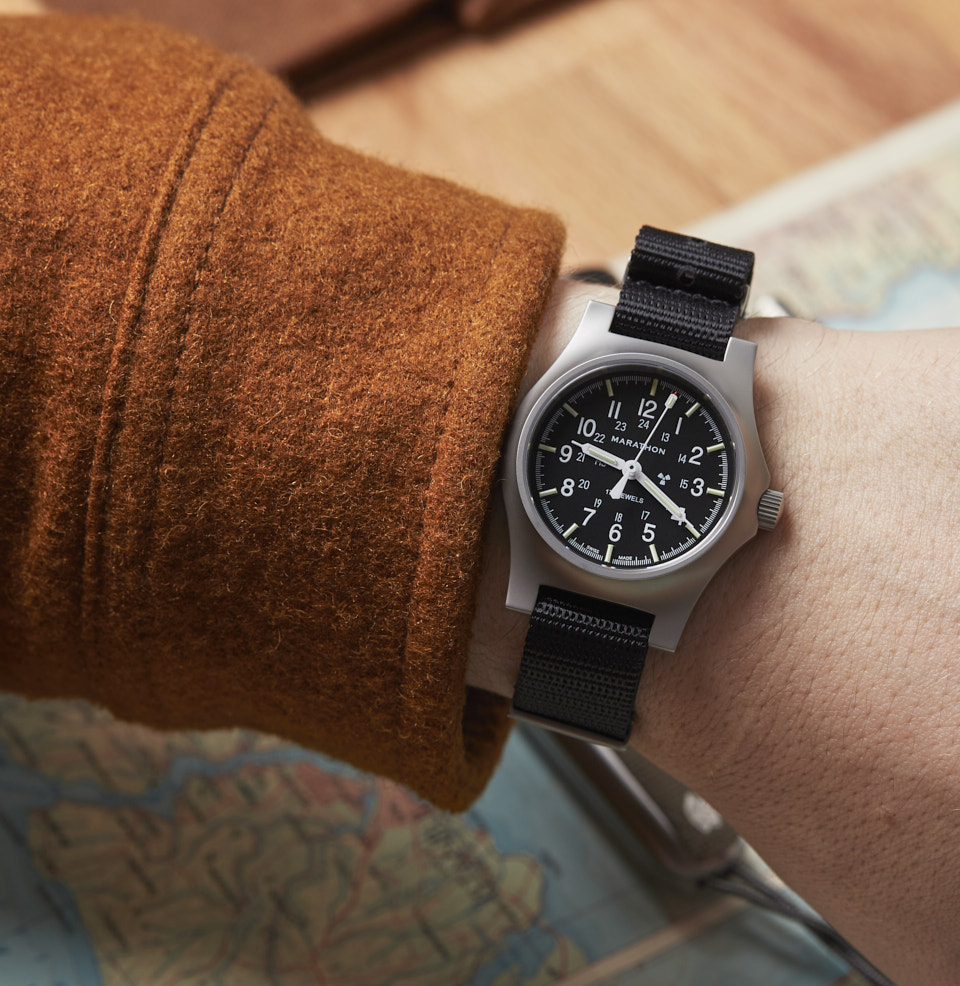 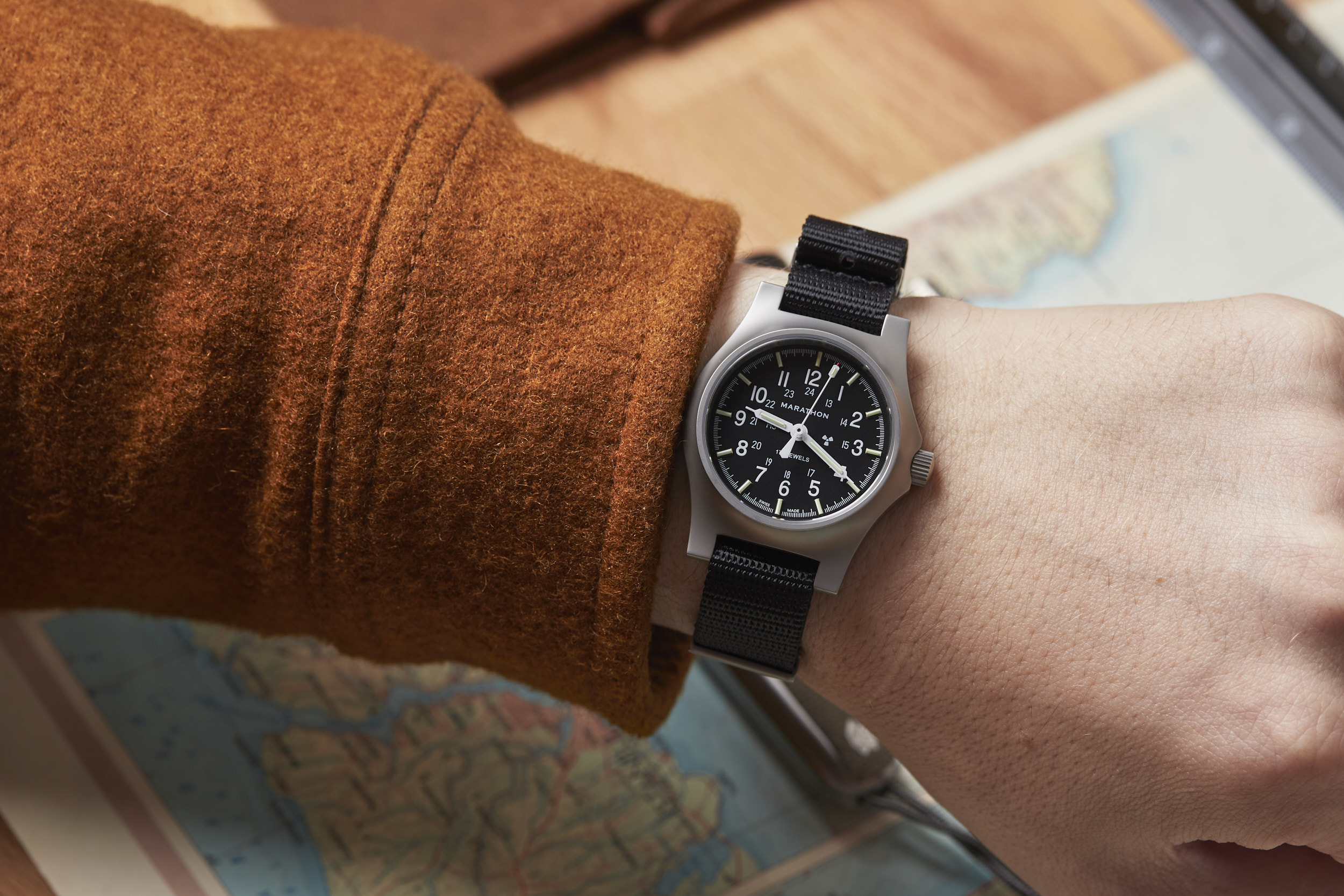 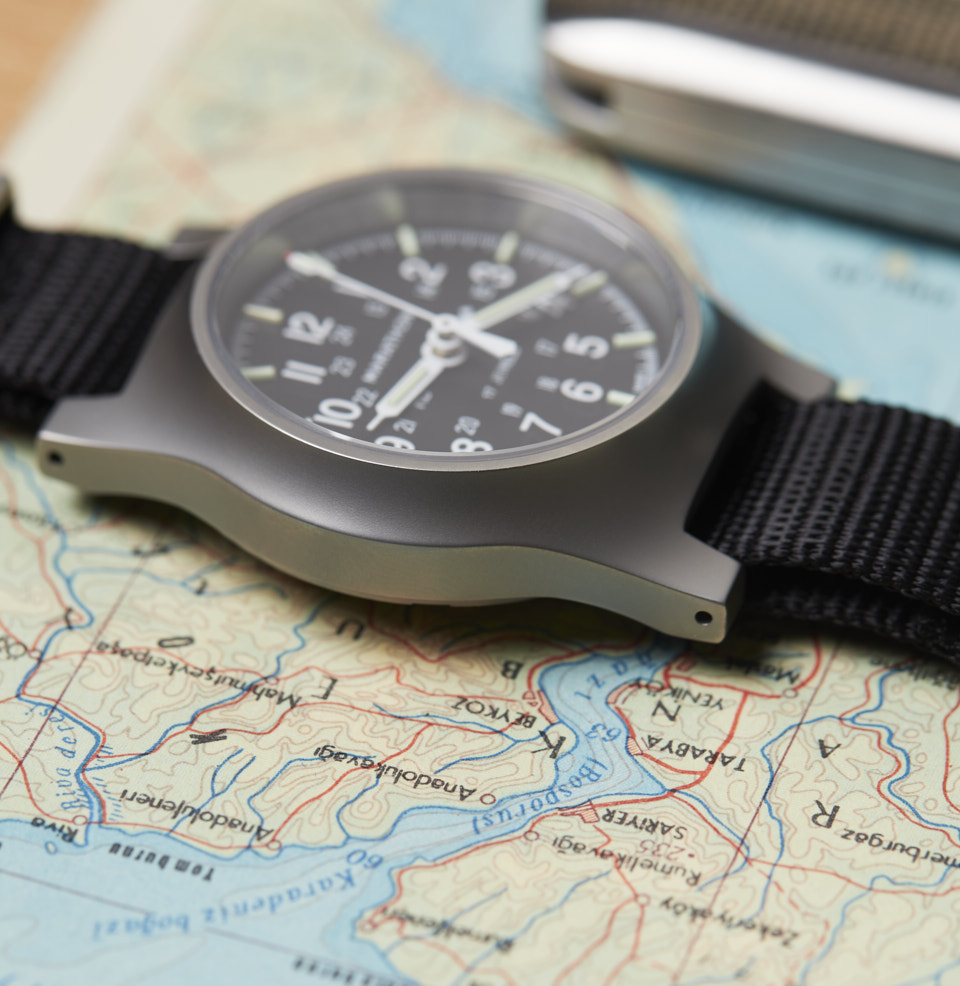 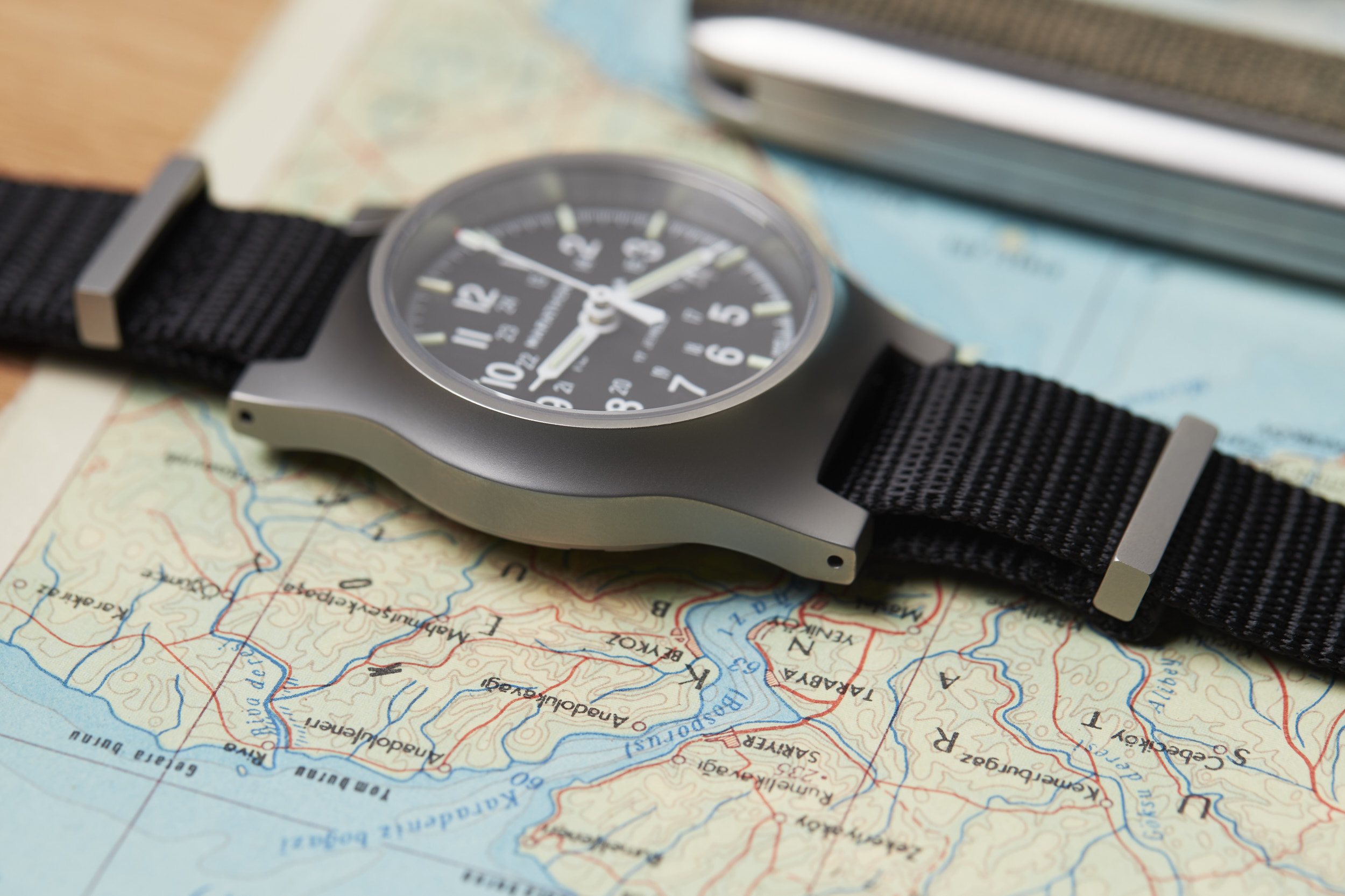 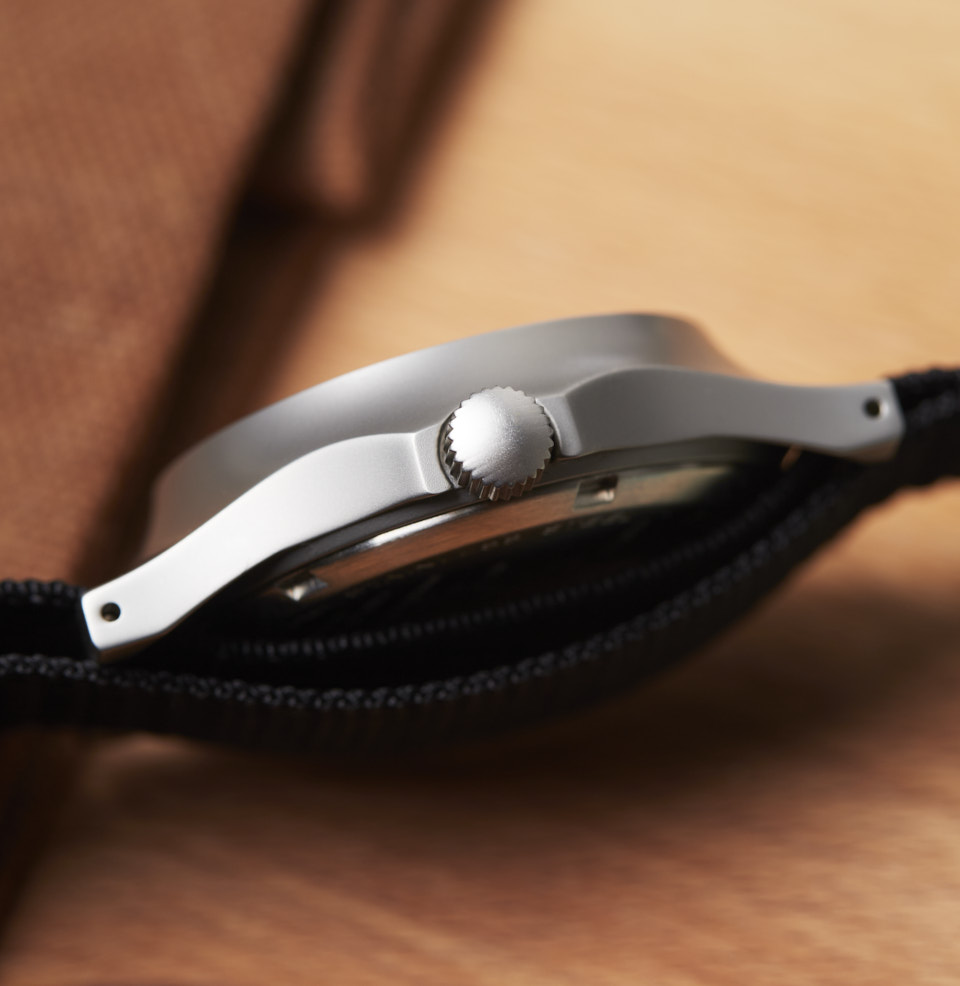 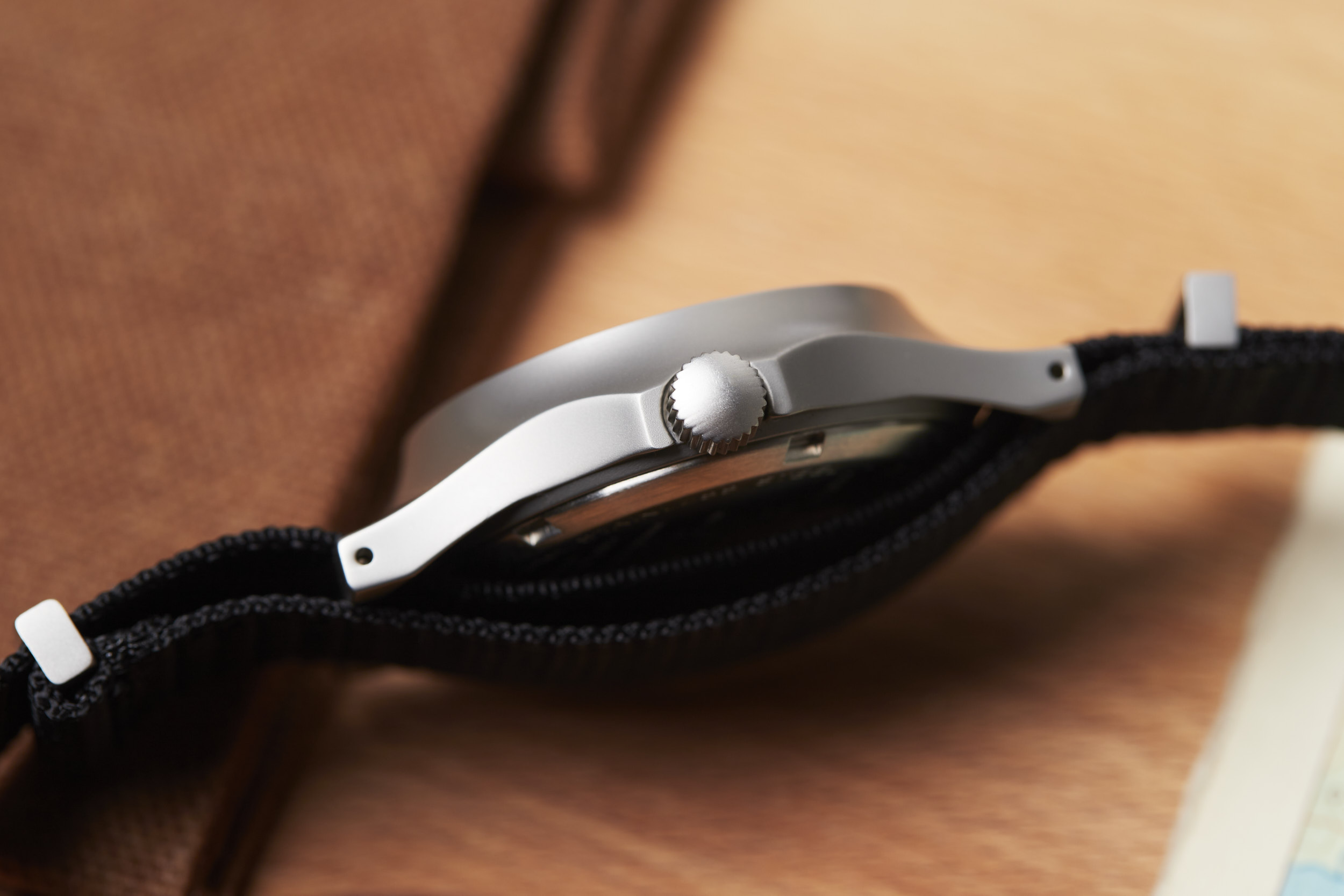 Matte Machined Steel
The two-piece case has a unique shape 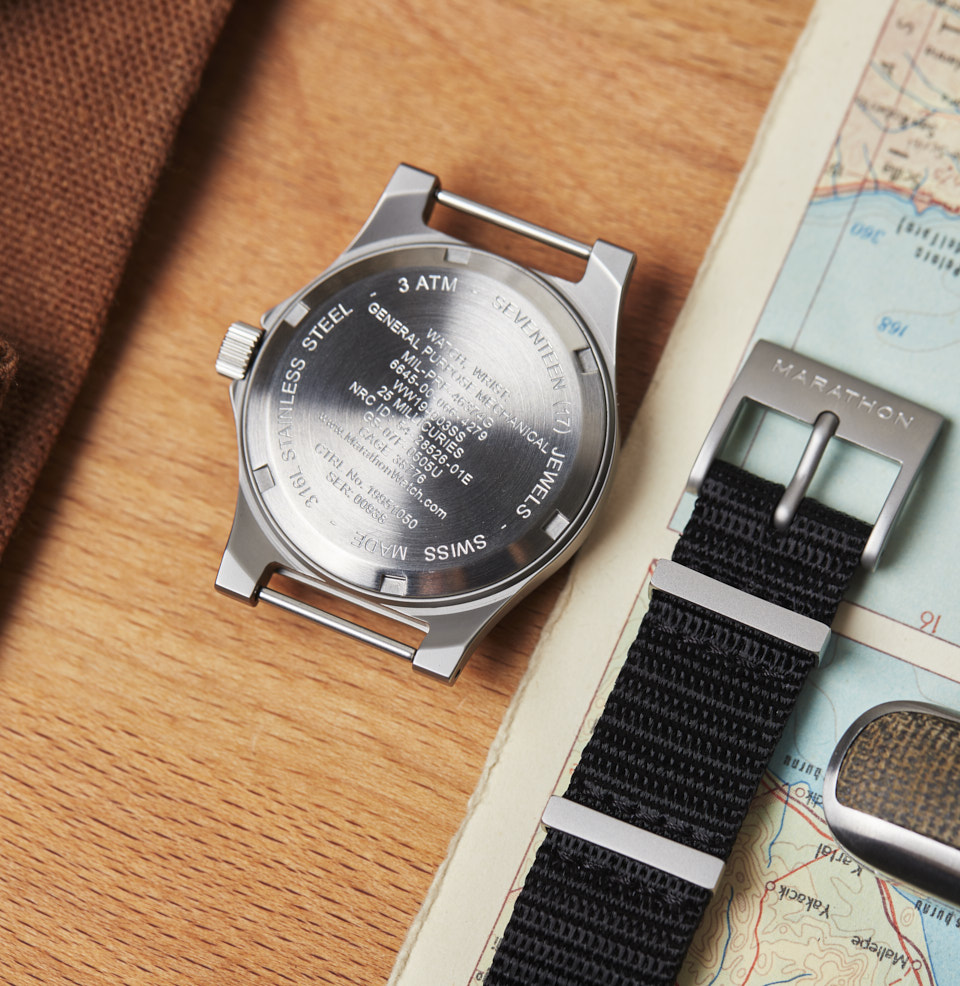 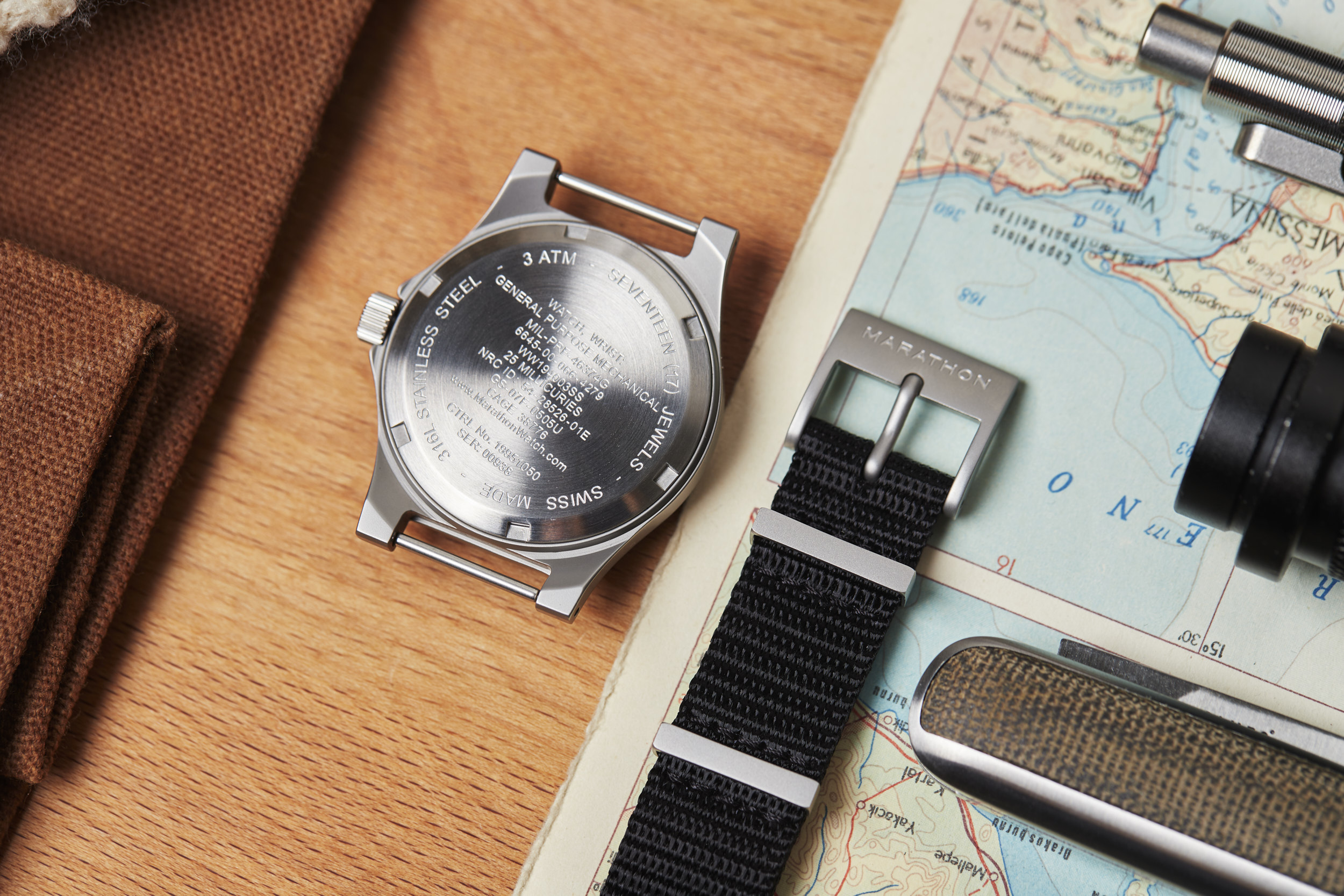 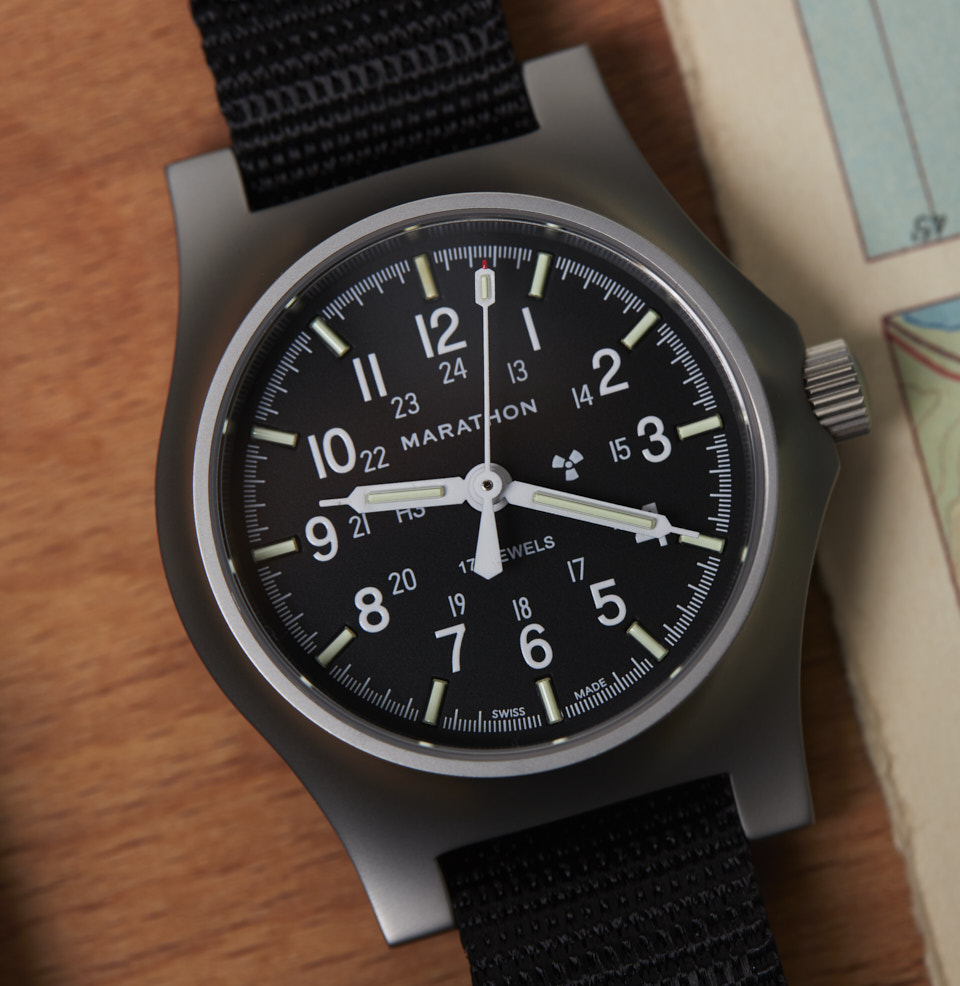 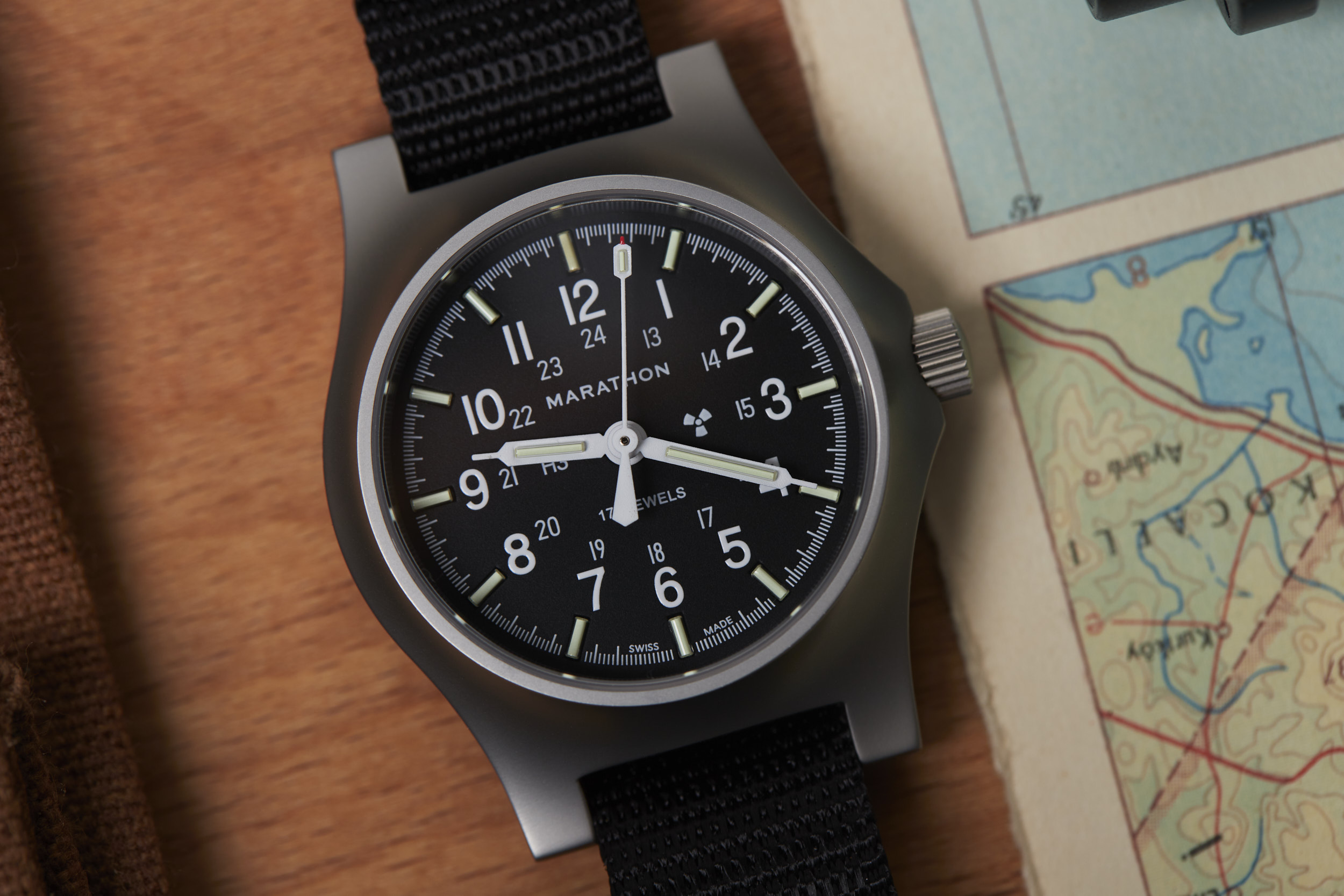 Classic Field Design
With large numerals and a 13-24hr track 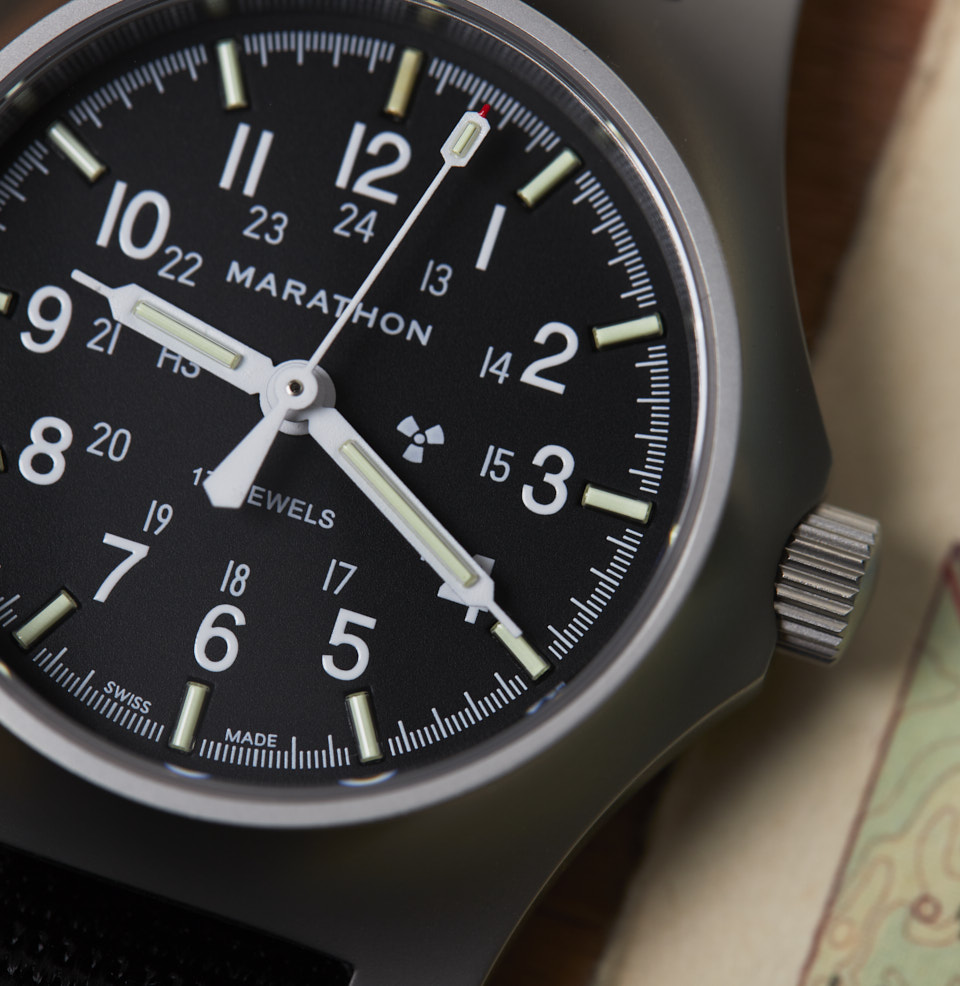 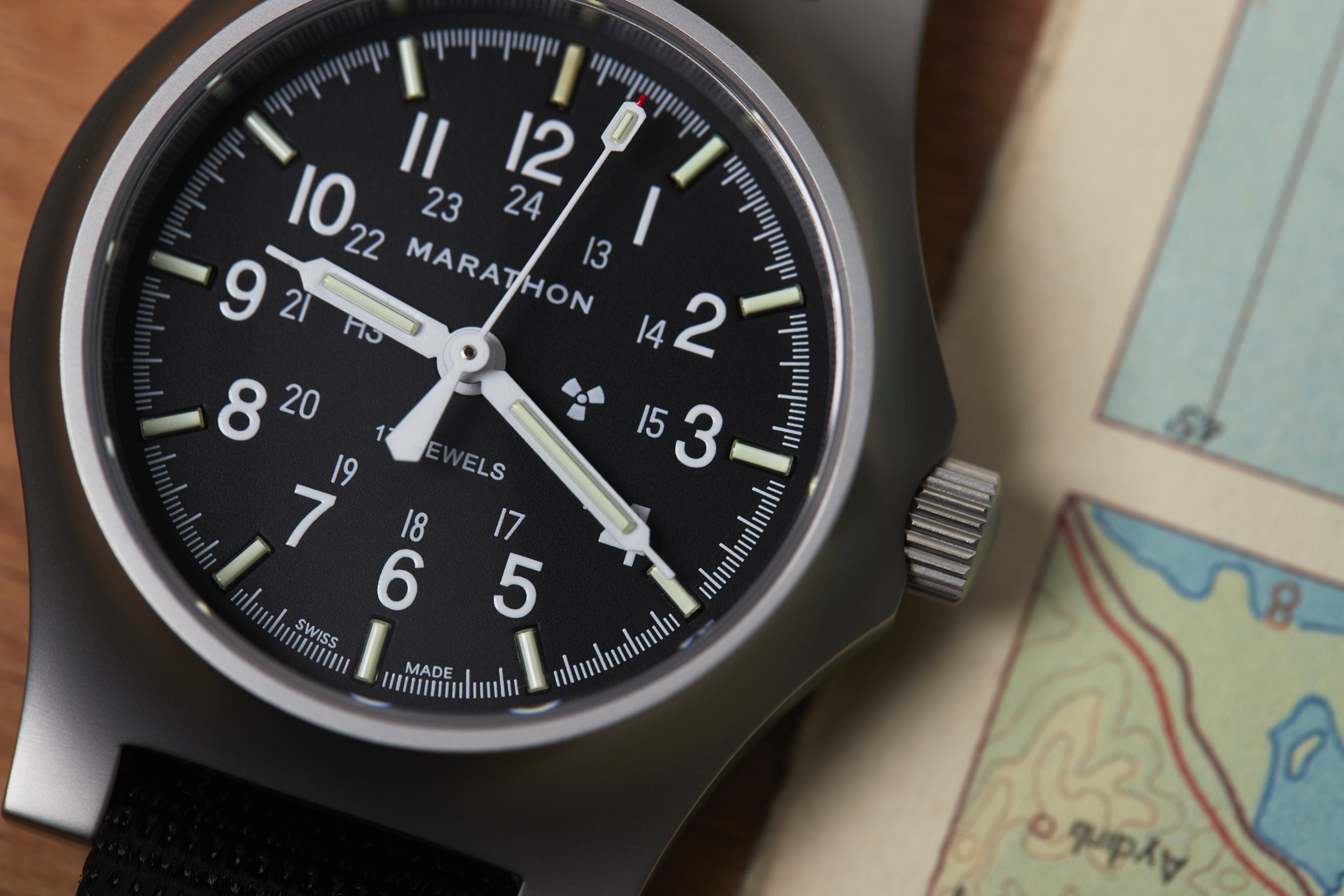 Bold syringe hands
Easy to read at a glance 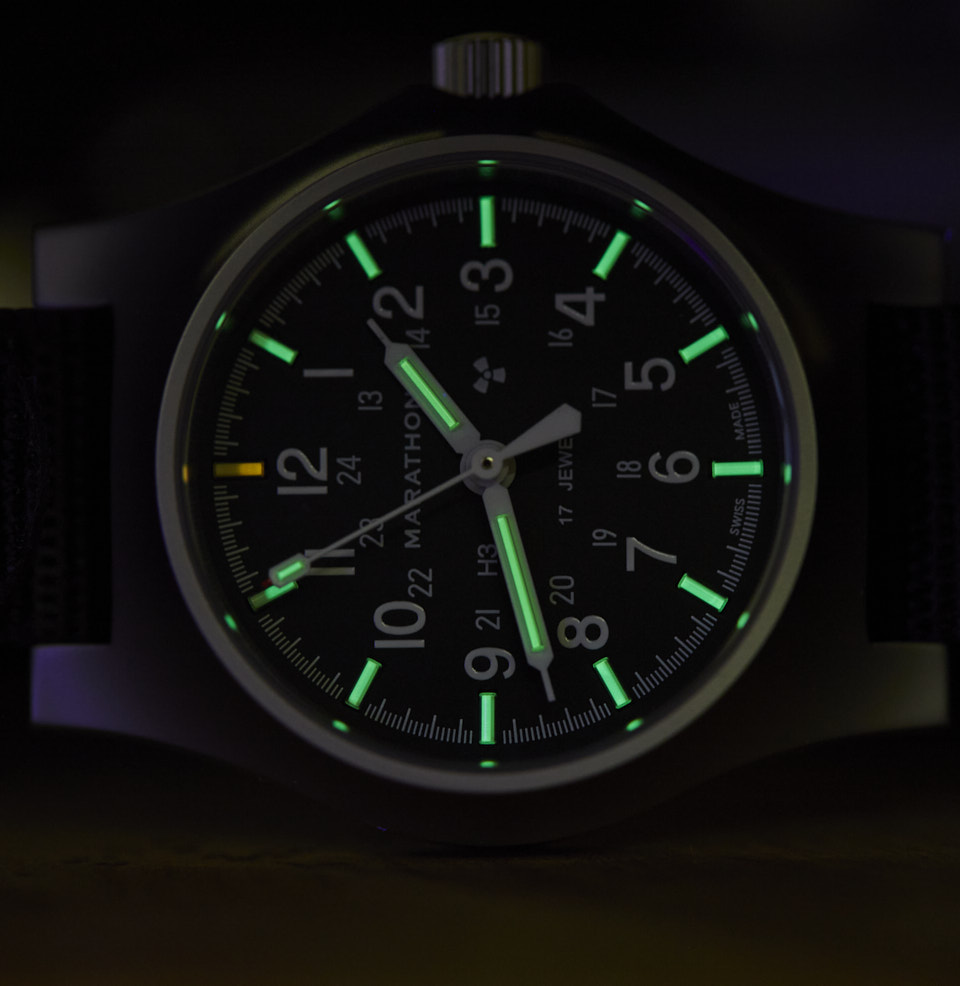 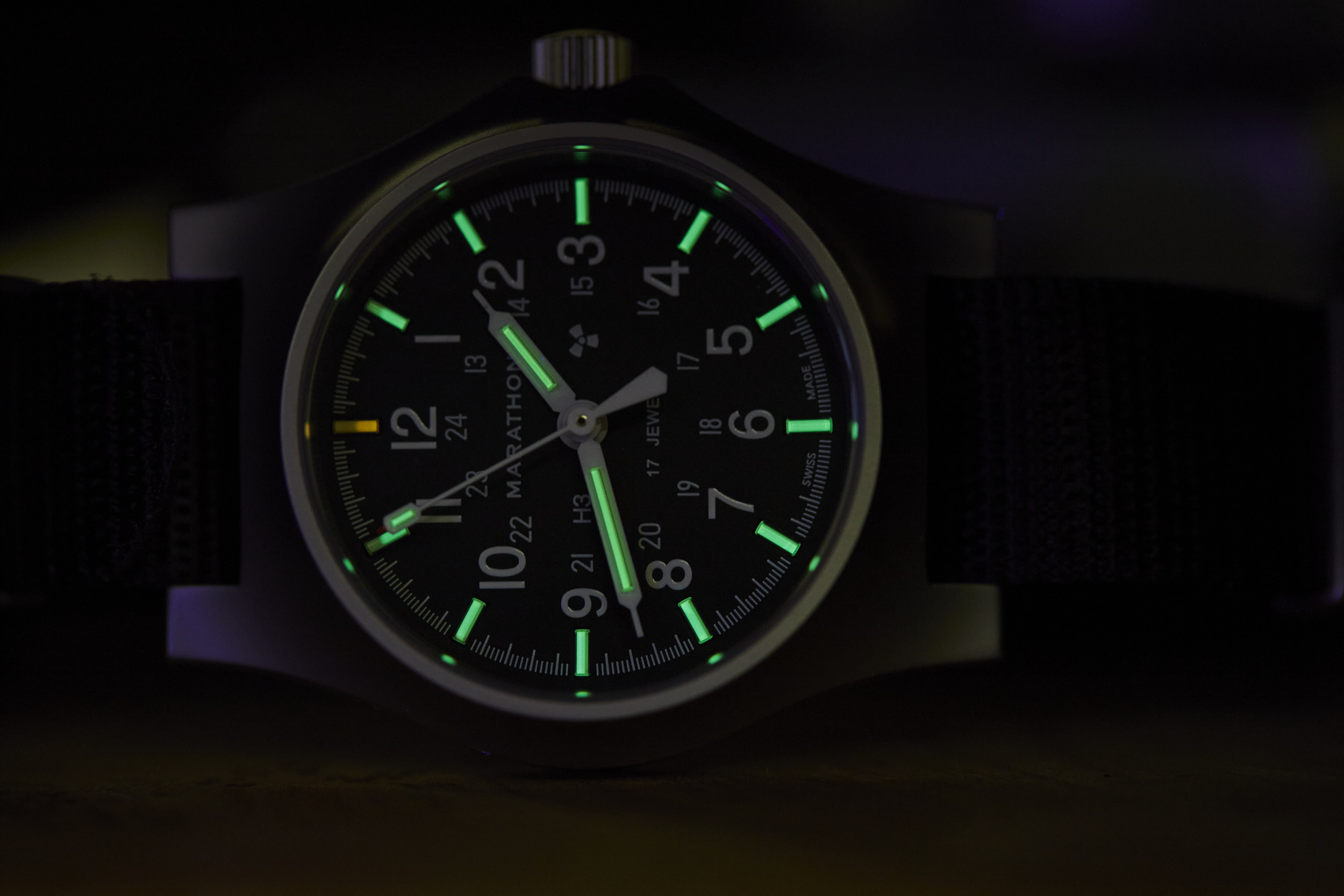 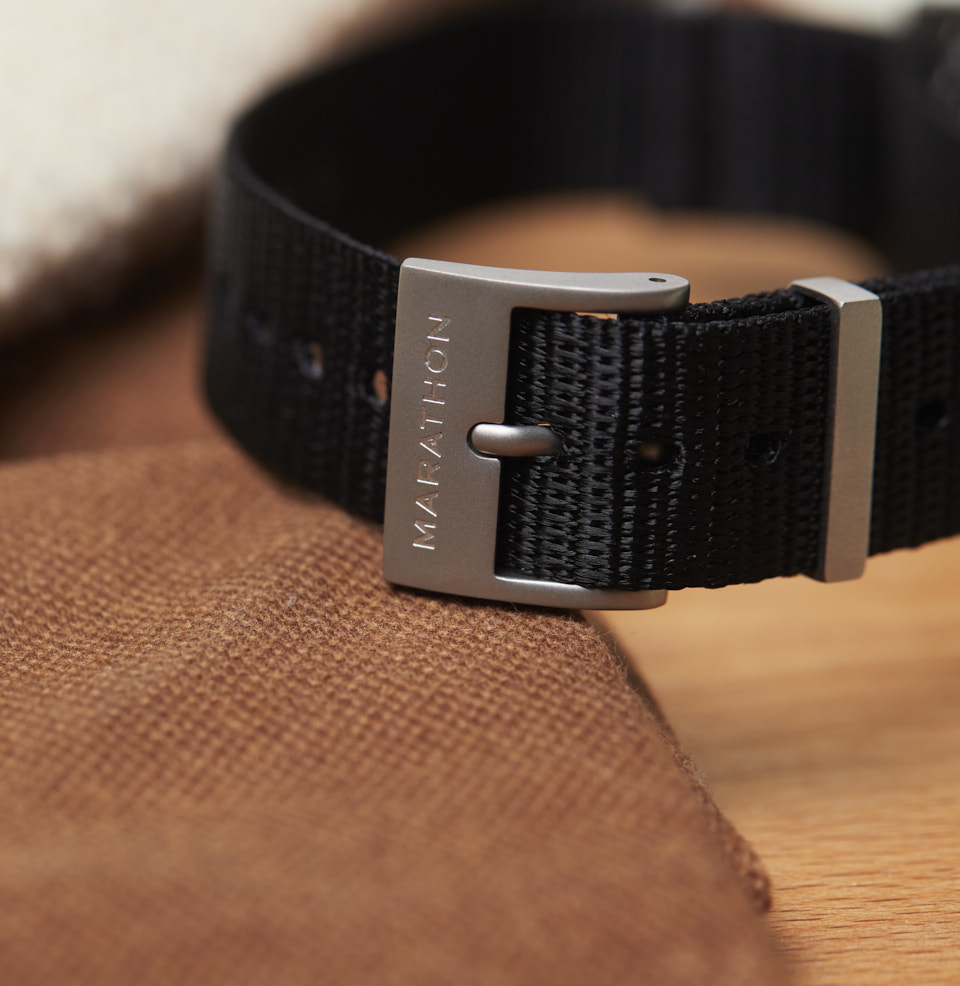 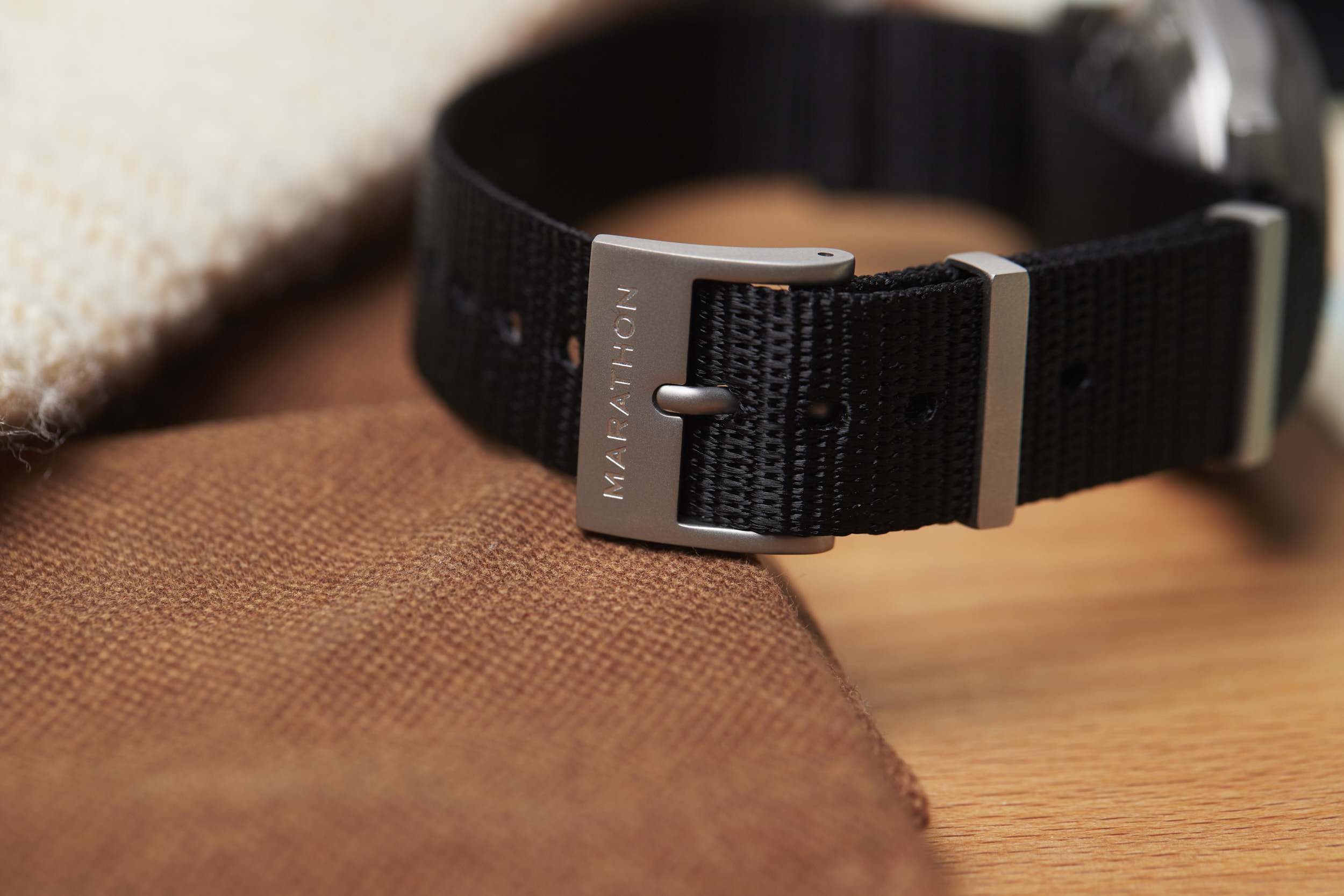 Founded in 1939, Marathon Watches of Canada is a family owned company, currently in its fourth generation. Known for their military issued watches, dating back to 1941, today’s Marathon is still a major supplier of mil-spec timepieces to the US Armed forces. Designed in Canada, but made in Switzerland at Marathon’s own factory in La Chaux de Fonds, their field, pilot, and dive watches are made to the exacting standards of the military. 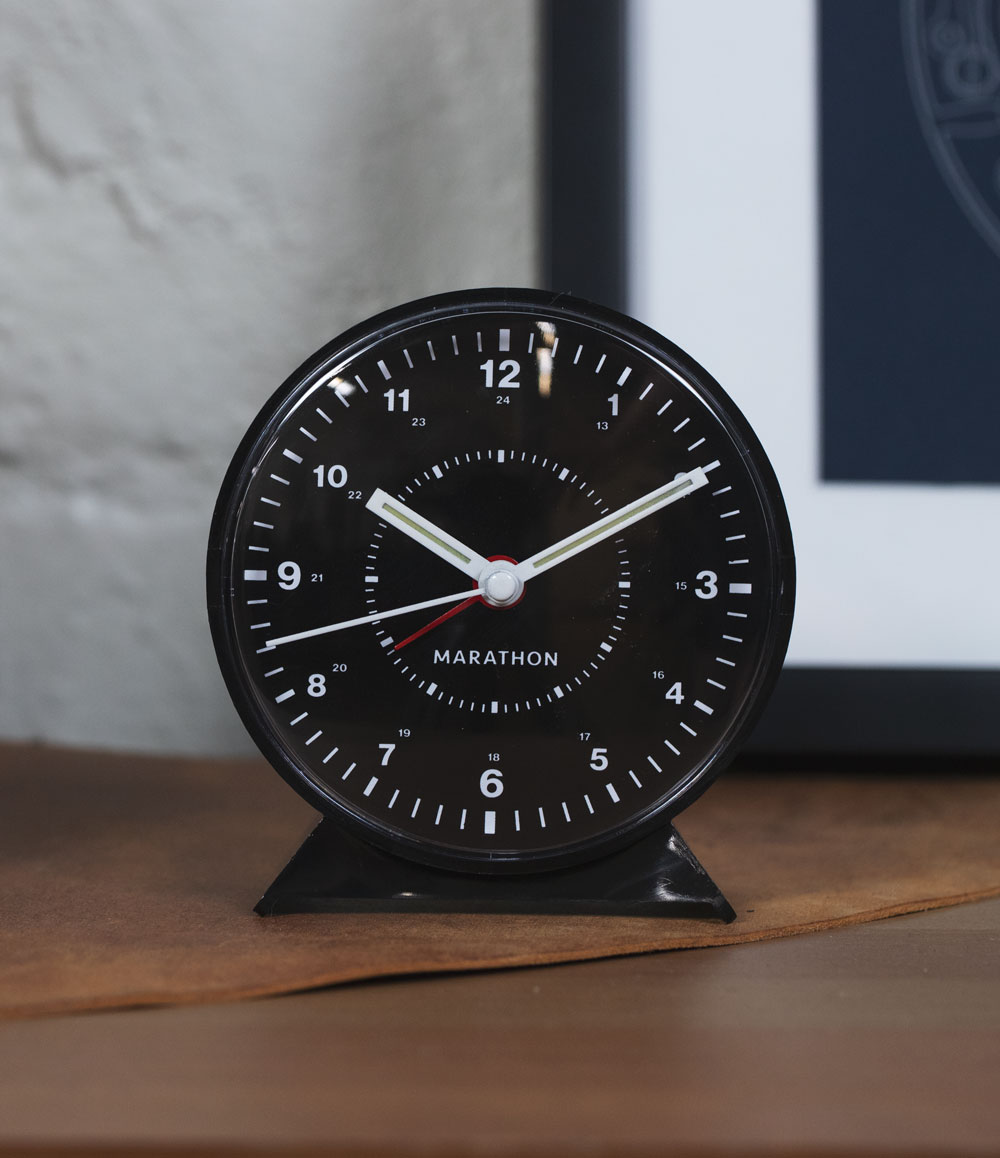 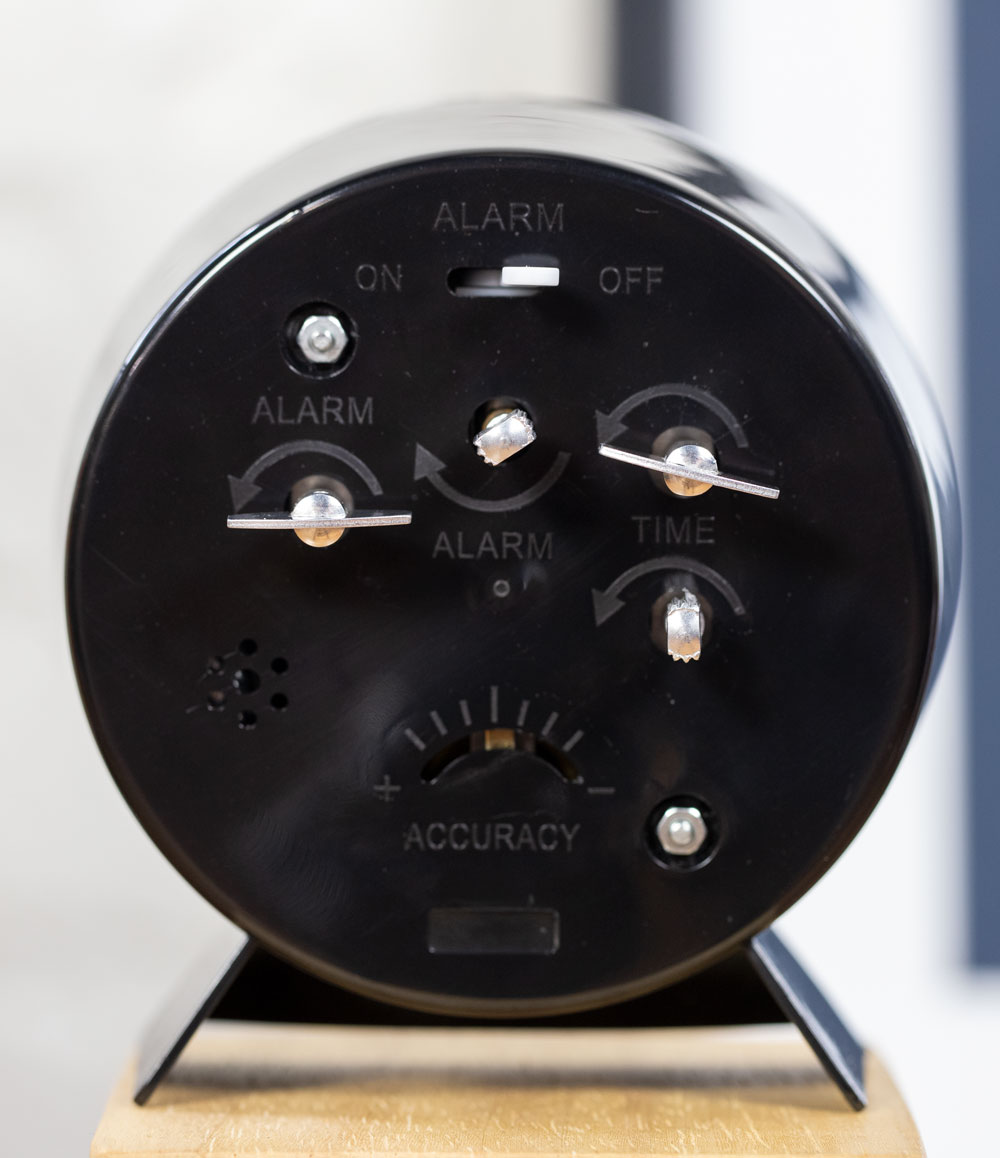 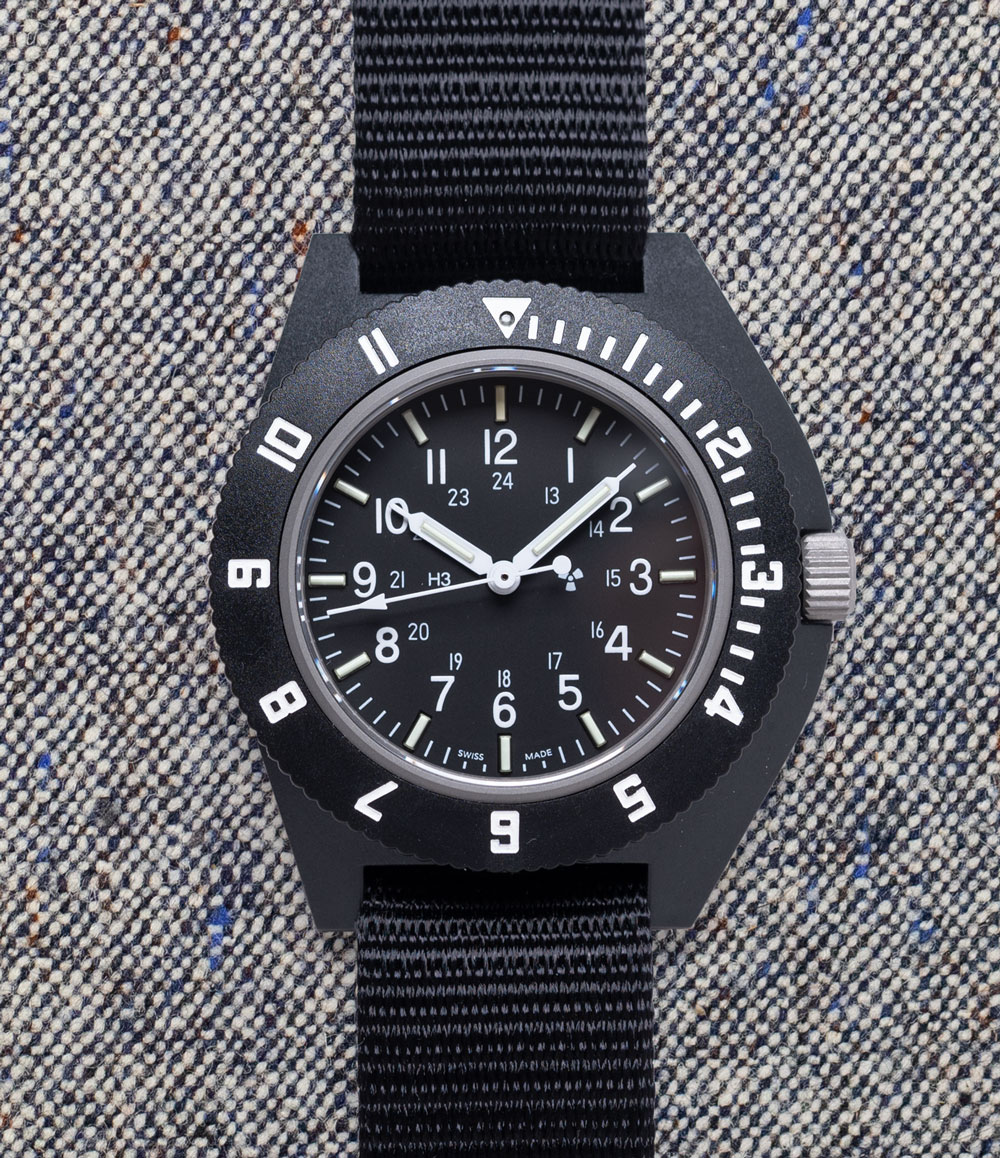 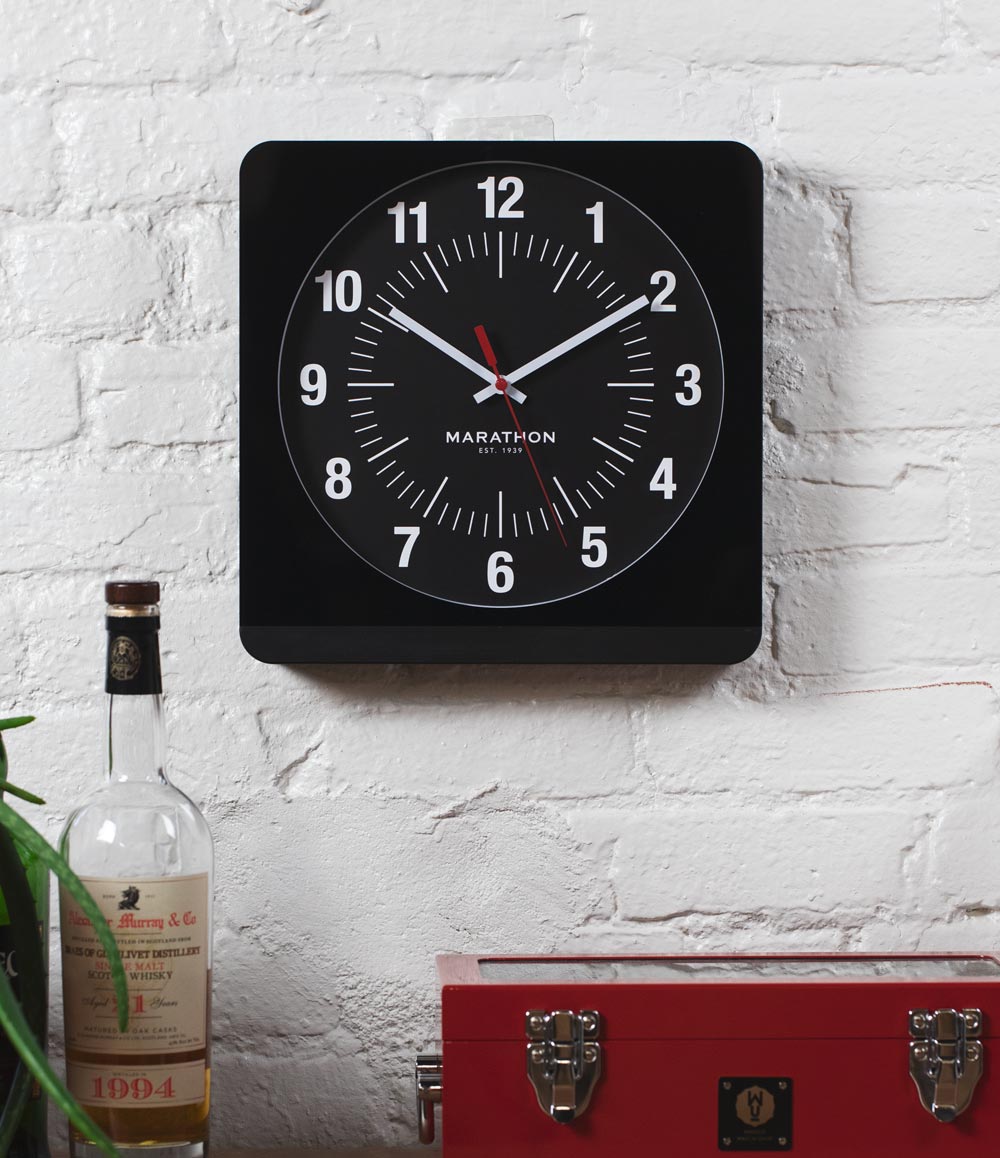 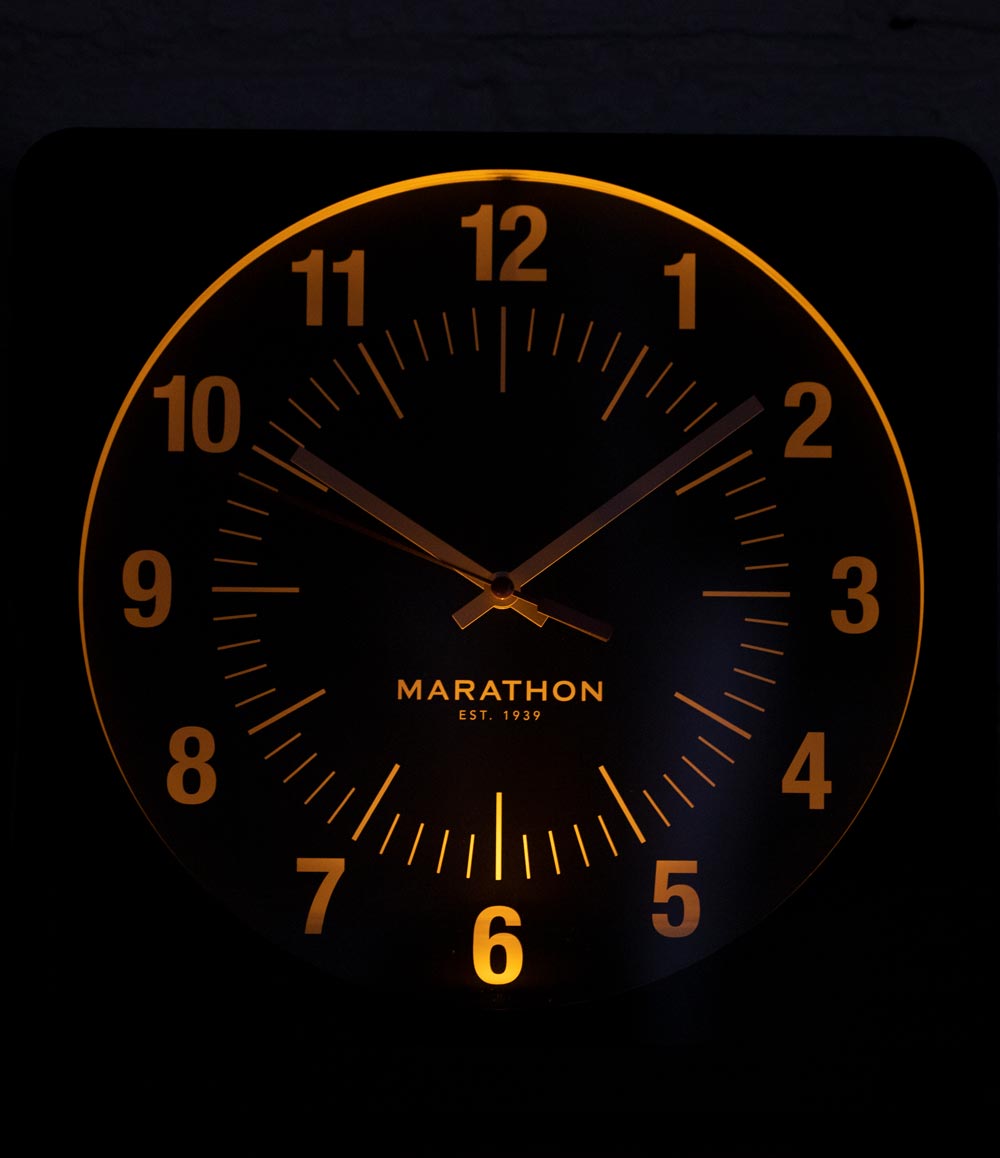 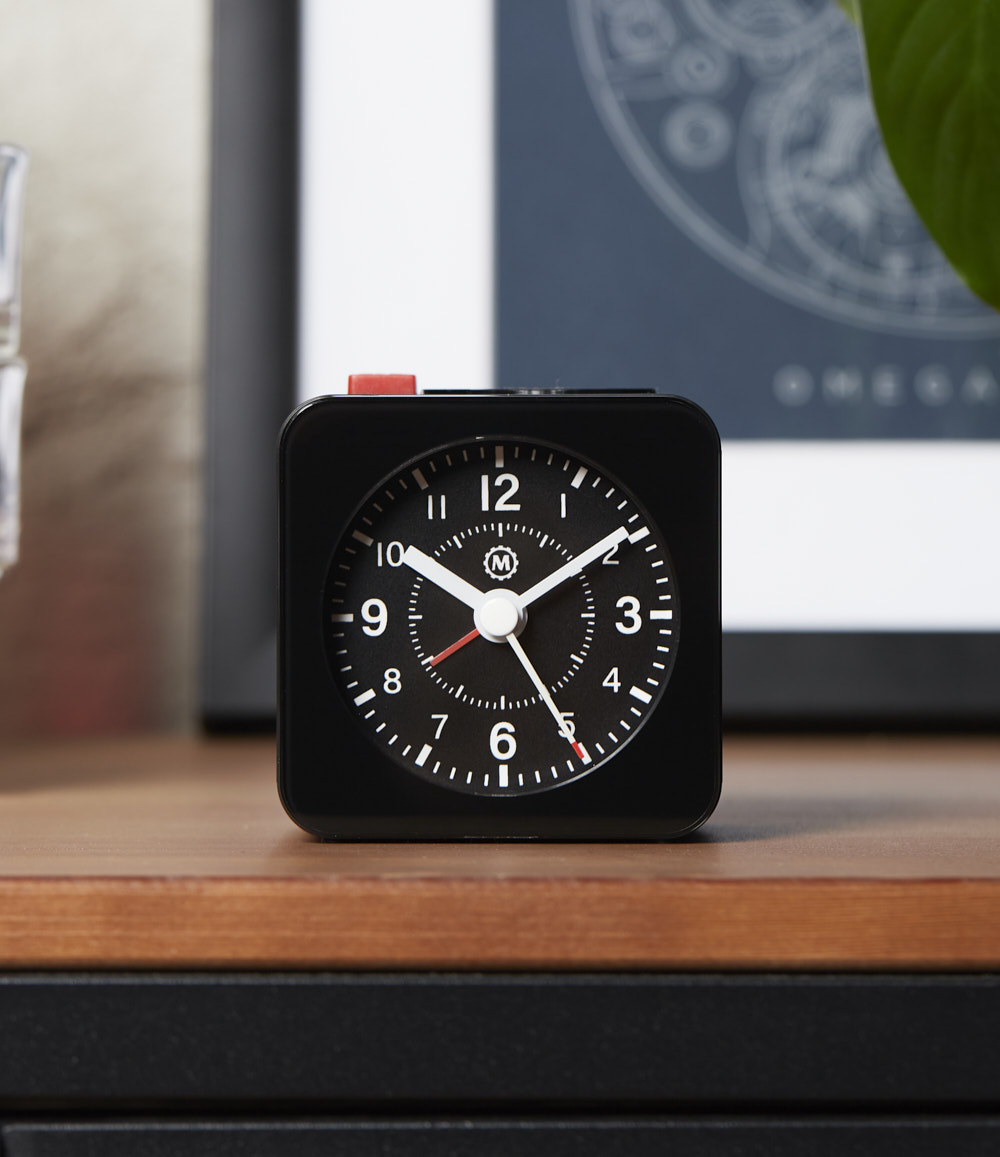 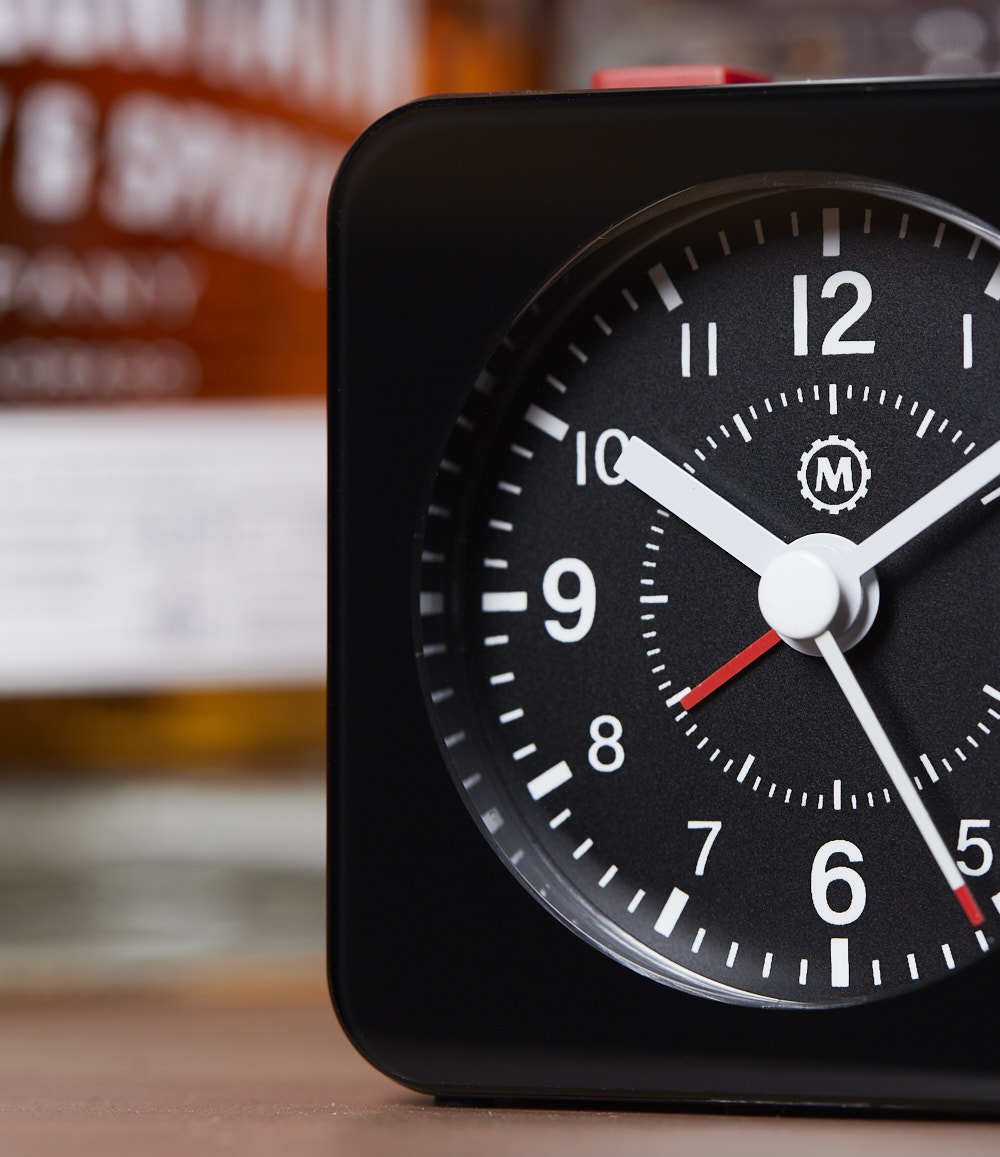 Add To Cart
$825.00
Finish selections for price & availability
Free shipping on orders over $150 in the US
Cart
X
0