What's New
Free domestic Shipping for orders over $150 and $200 to canada.
A 24-hour watch that simulates the passing of the day
BOTTA
TRES 24 Quartz 40mm
Dial
Email Me When Available
Item no longer available

Add To Cart
$535.00
Finish selections for price & availability
Free shipping on orders over $150 in the US
BOTTA
TRES 24 Quartz 40mm
A 24-hour watch that simulates the passing of the day
Dial
Email Me When Available
Item no longer available

Add To Cart
$535.00
Finish selections for price & availability
Free shipping on orders over $150 in the US

BOTTA always pushes the boundaries of how time is perceived, and though famous for their one-handed designs, continues this pursuit with the three-handed TRES 24. Though three-handed, nothing is quite as it seems as the hour hand runs on a 24-hour scale, thus reflecting the motion of the sun. It points straight up at 12/noon, when the sun is at its highest point, and straight down at midnight, illustrating the passing of the day. With the addition of a minutes hand, time can be ready exactly. A discreet seconds hand then exists at the center of the dial on a circular disk with a patented “C” graphic.

Though poetic in its methods, the TRES 24 is exacting in its design. The dial features a chapter ring with clean minute markers printed in white, and numerals per hour. The dial is then split in half, with the upper in light gray, and the lower half in dark, suggesting night and day. The cardinal points are highlighted in orange or green, emphasizing the passing of a quarter day. Additionally, a date is included at the midnight position.

The full titanium case continues the precision theme with a beautifully angular design that gently hugs the wrist. Though 40mm in diameter, the lugs manage to actually come in at 39mm, tucking under the watch. Clean and lightweight, at 7.7mm thick it’s easy to wear all day and under layers. Inside is the Swiss-made RONDA 515.24H keeping time accurately. 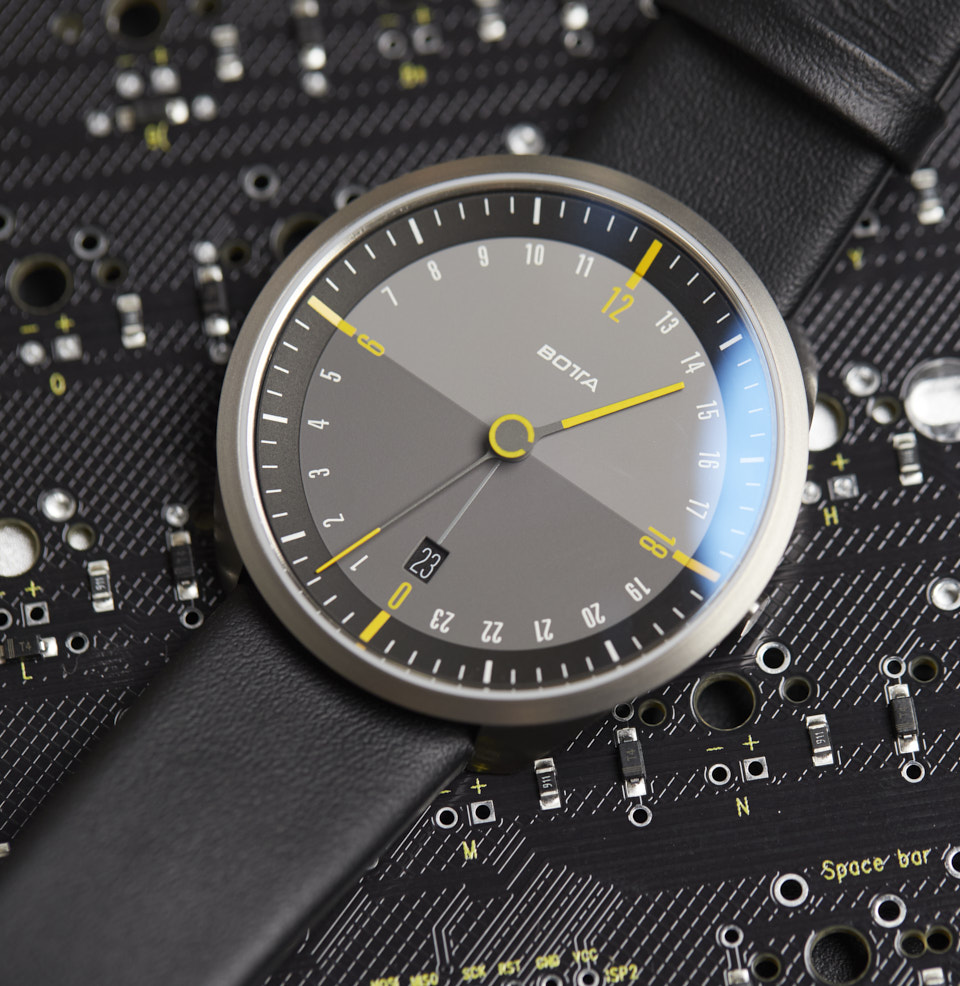 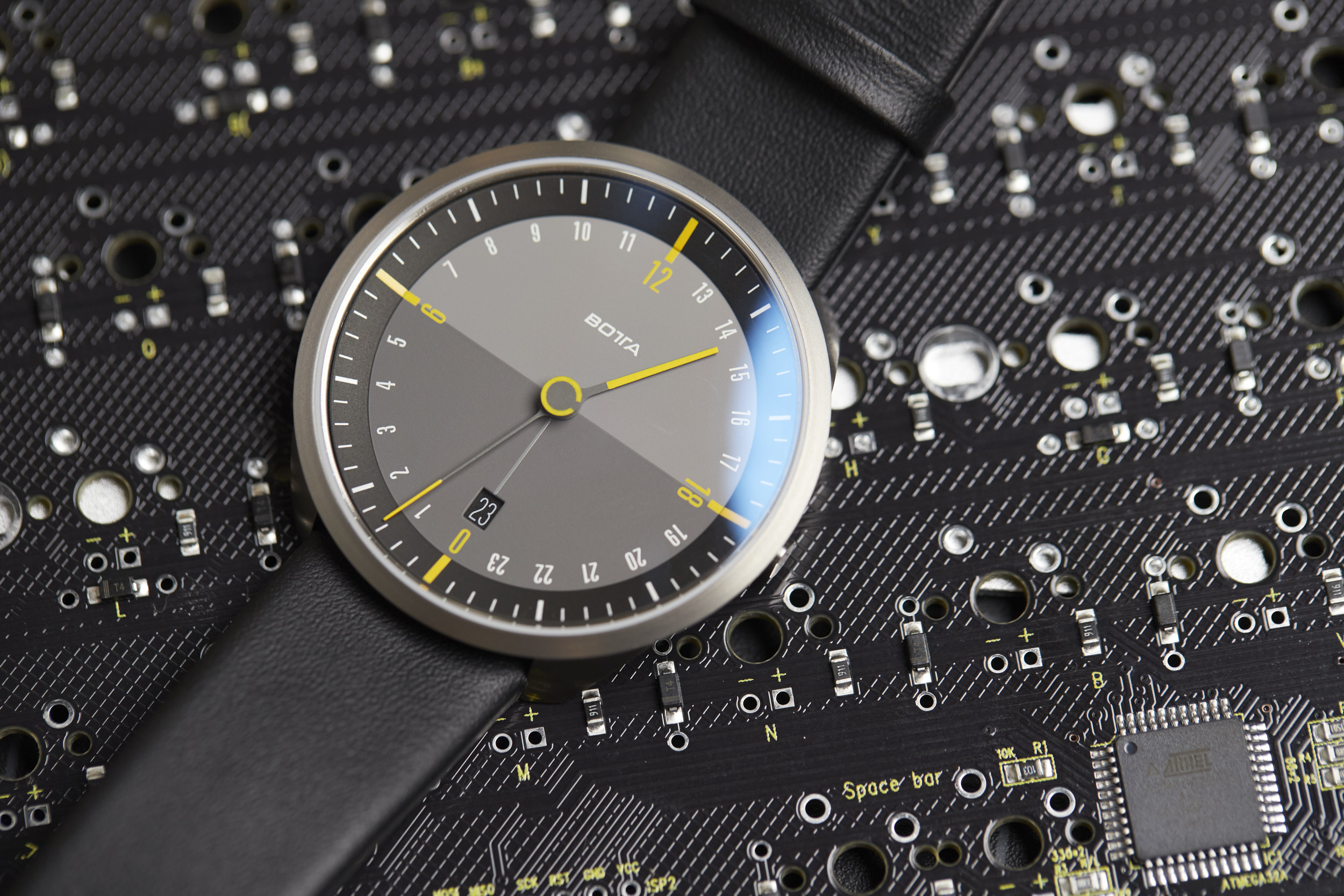 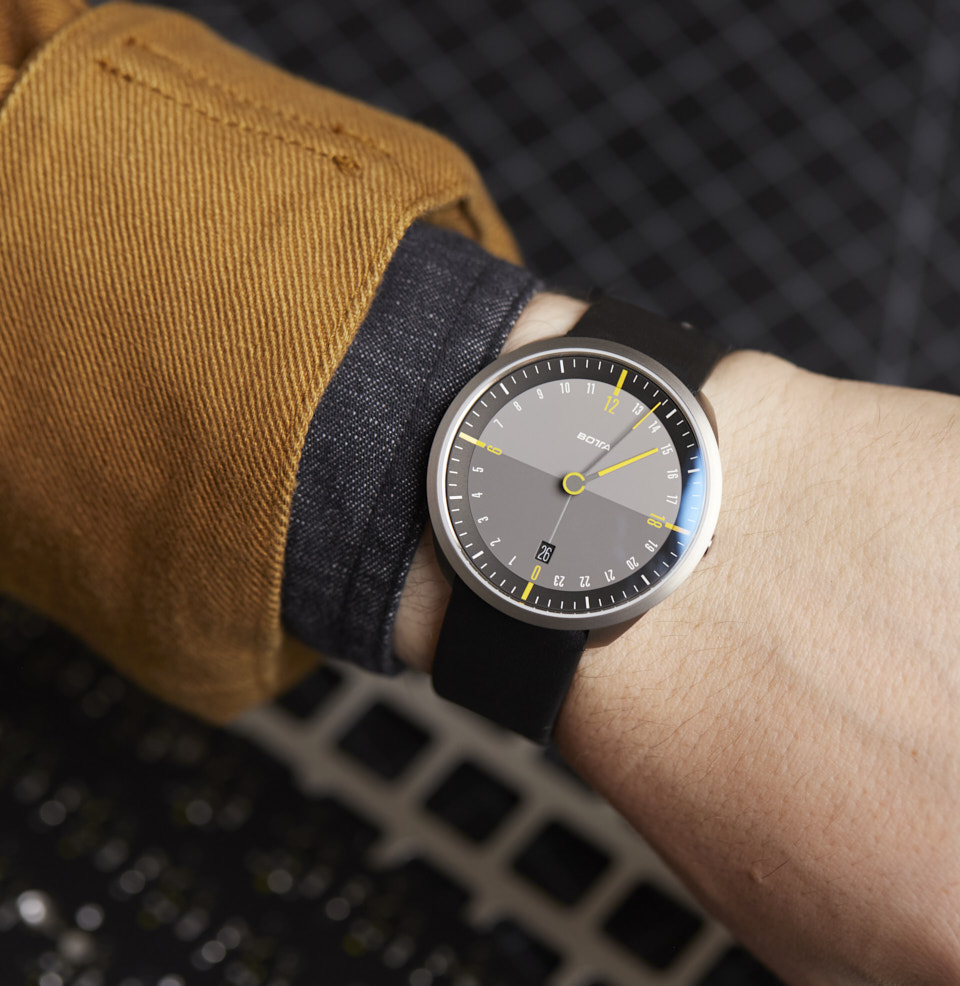 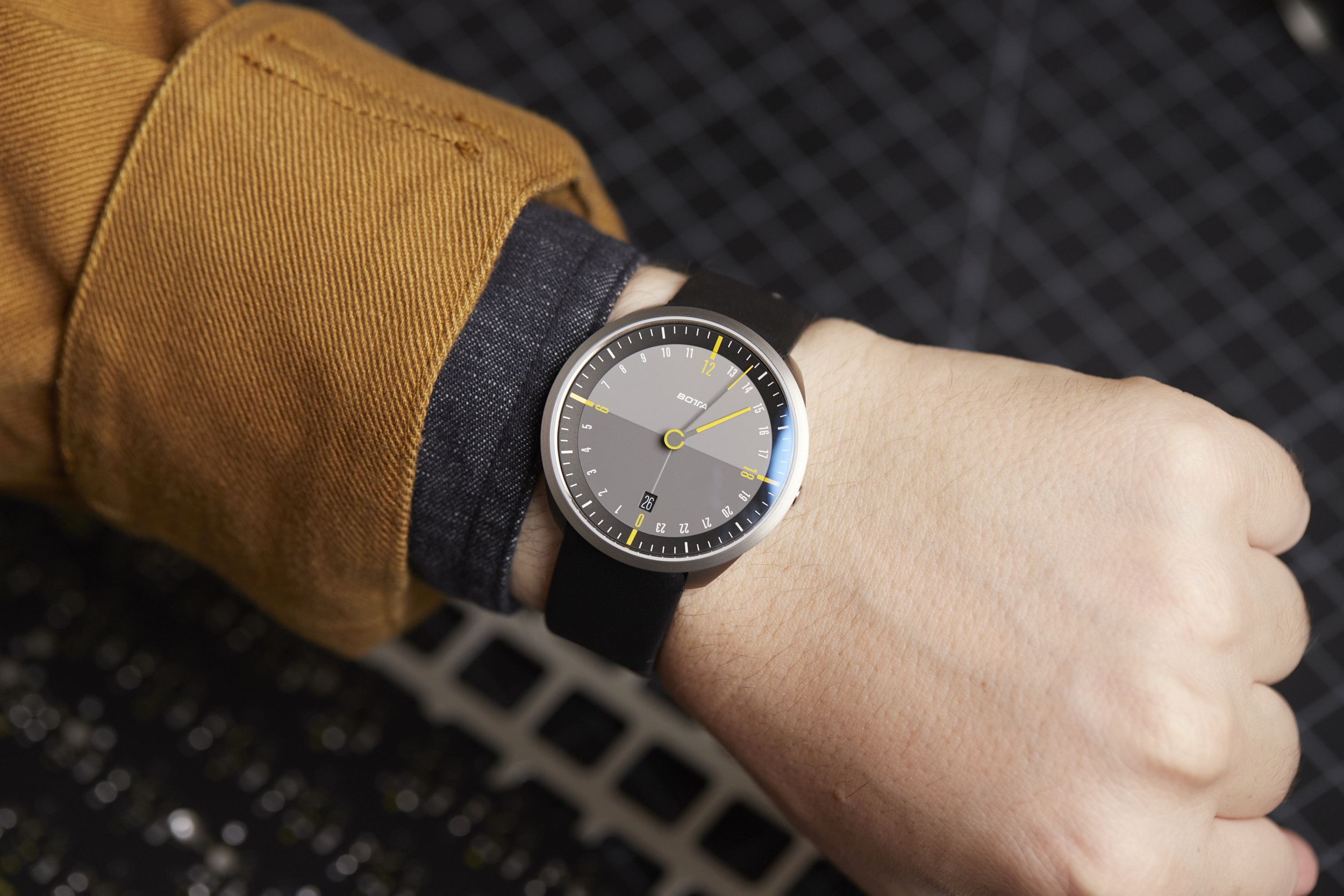 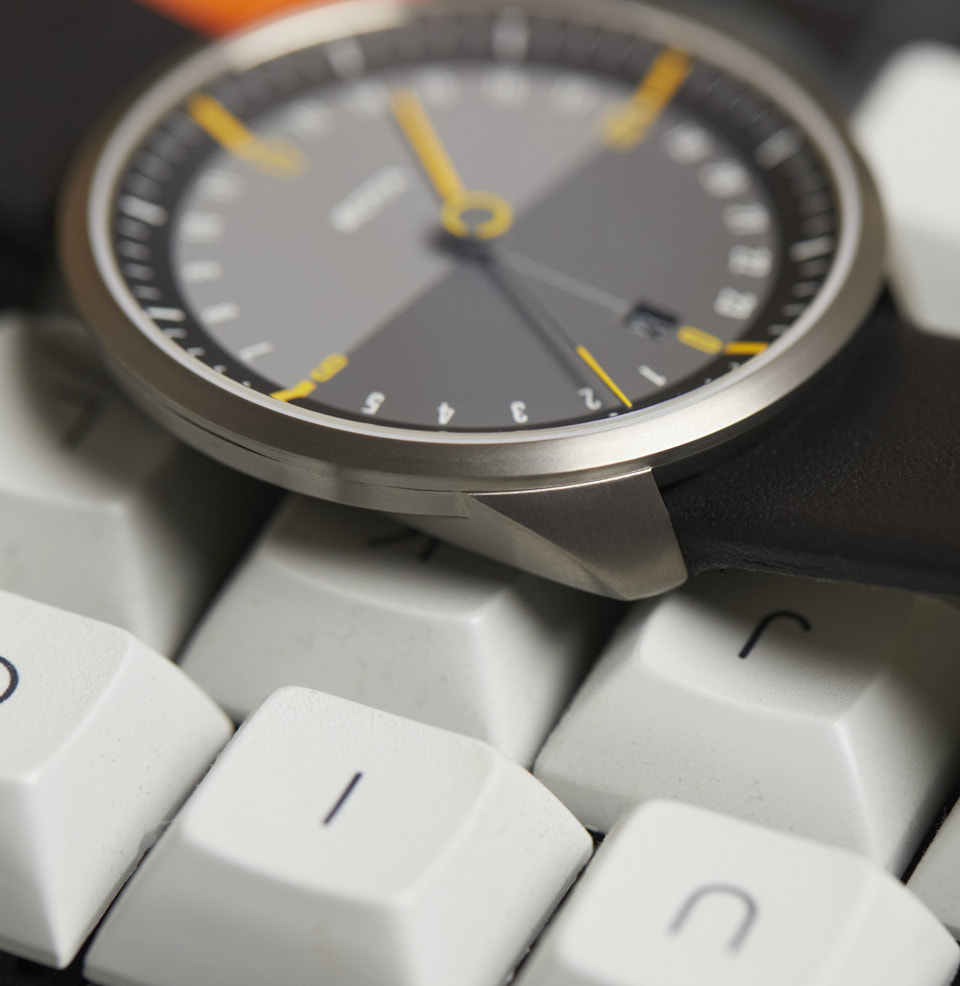 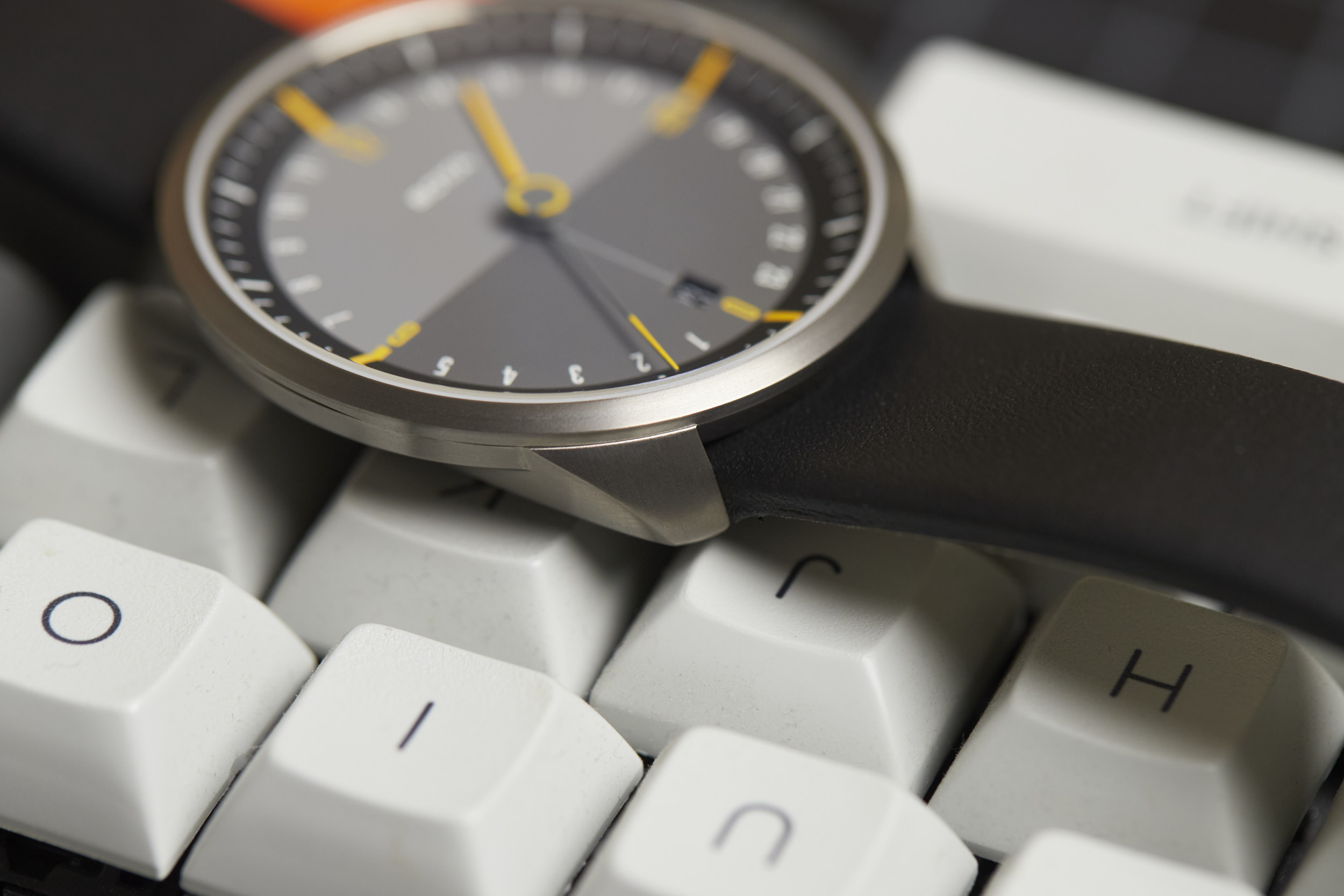 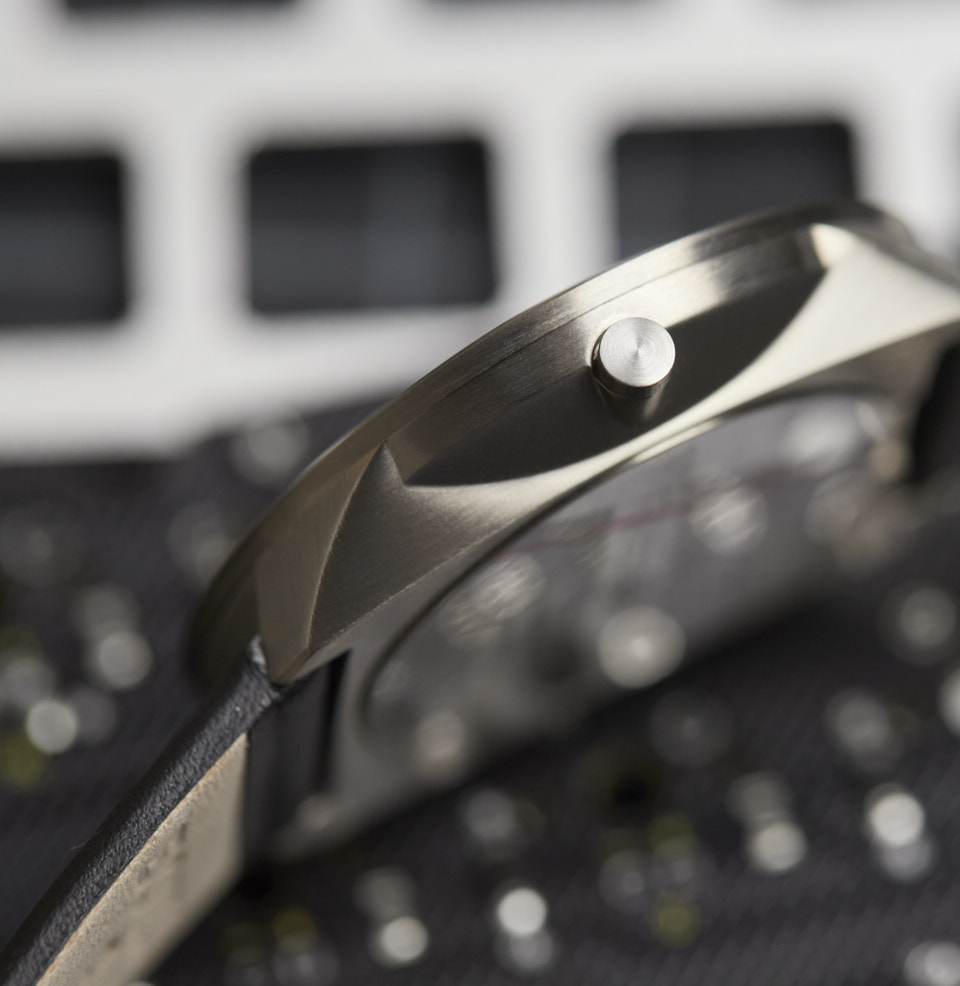 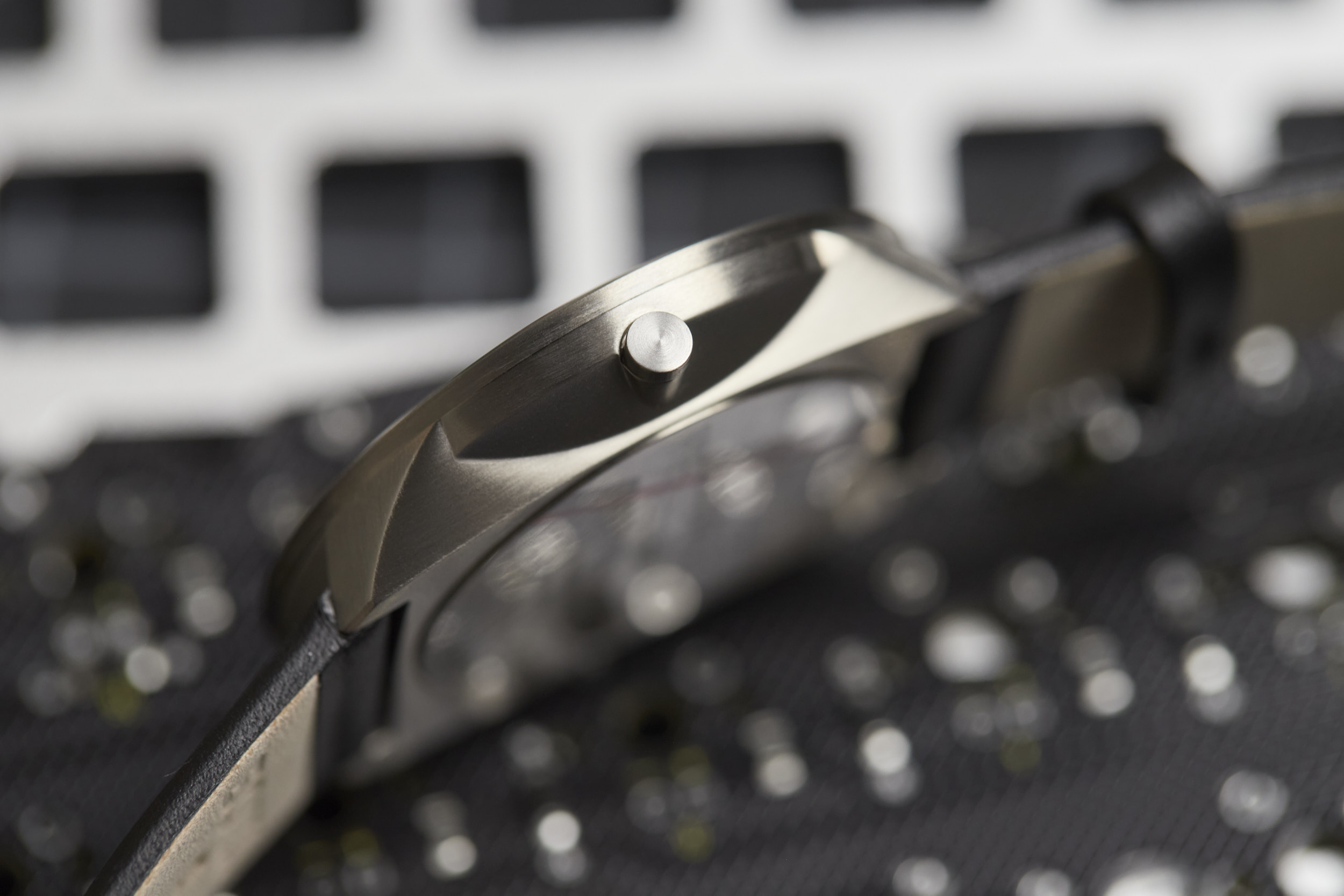 Architectural lines
The unique case shape is attractive from all angles 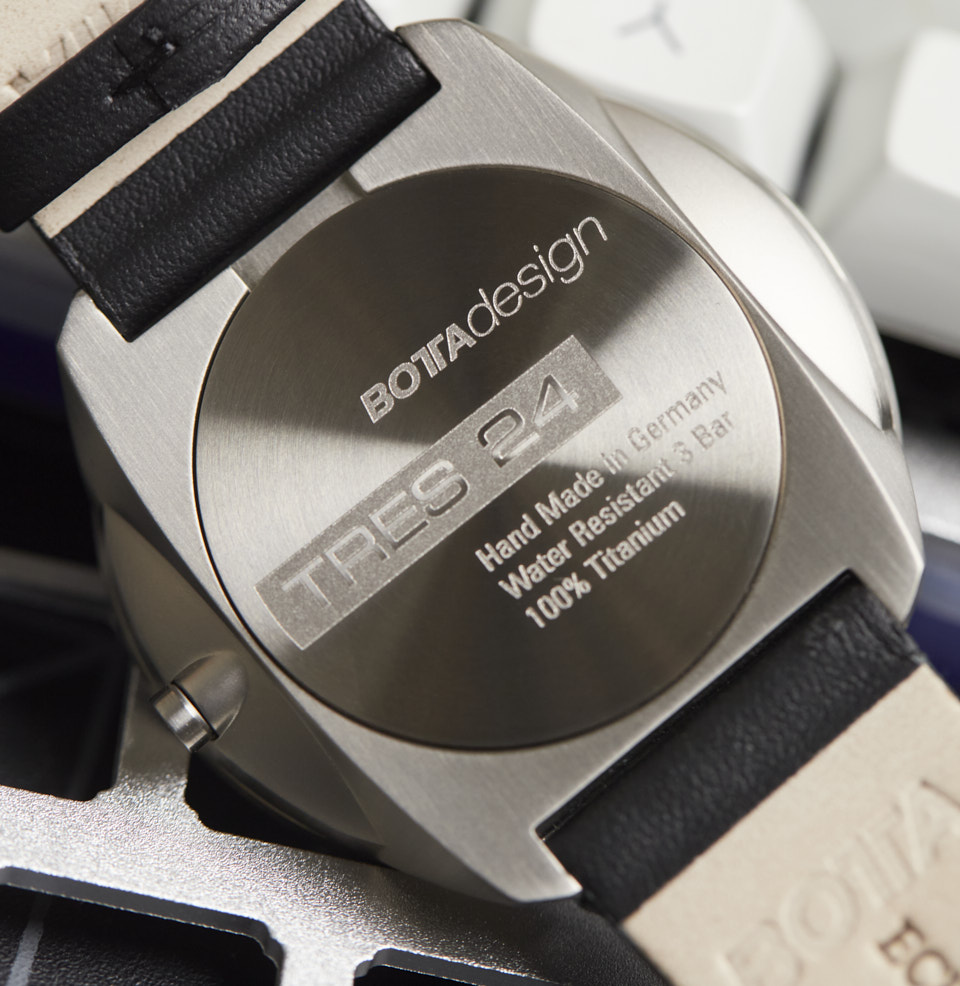 Made in Germany with a Swiss Movement
+ 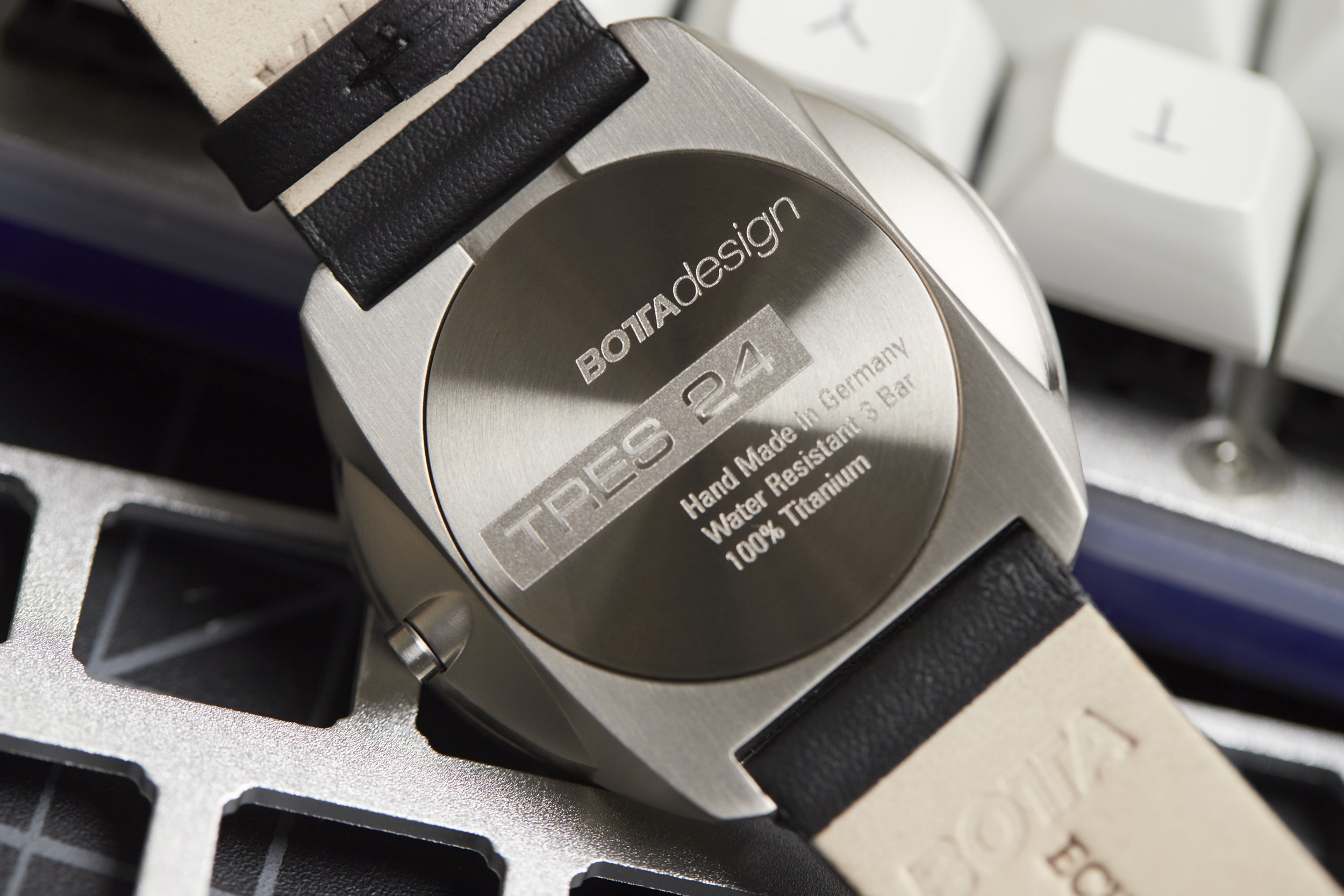 Made in Germany with a Swiss Movement
The Ronda 515.24H ticks within 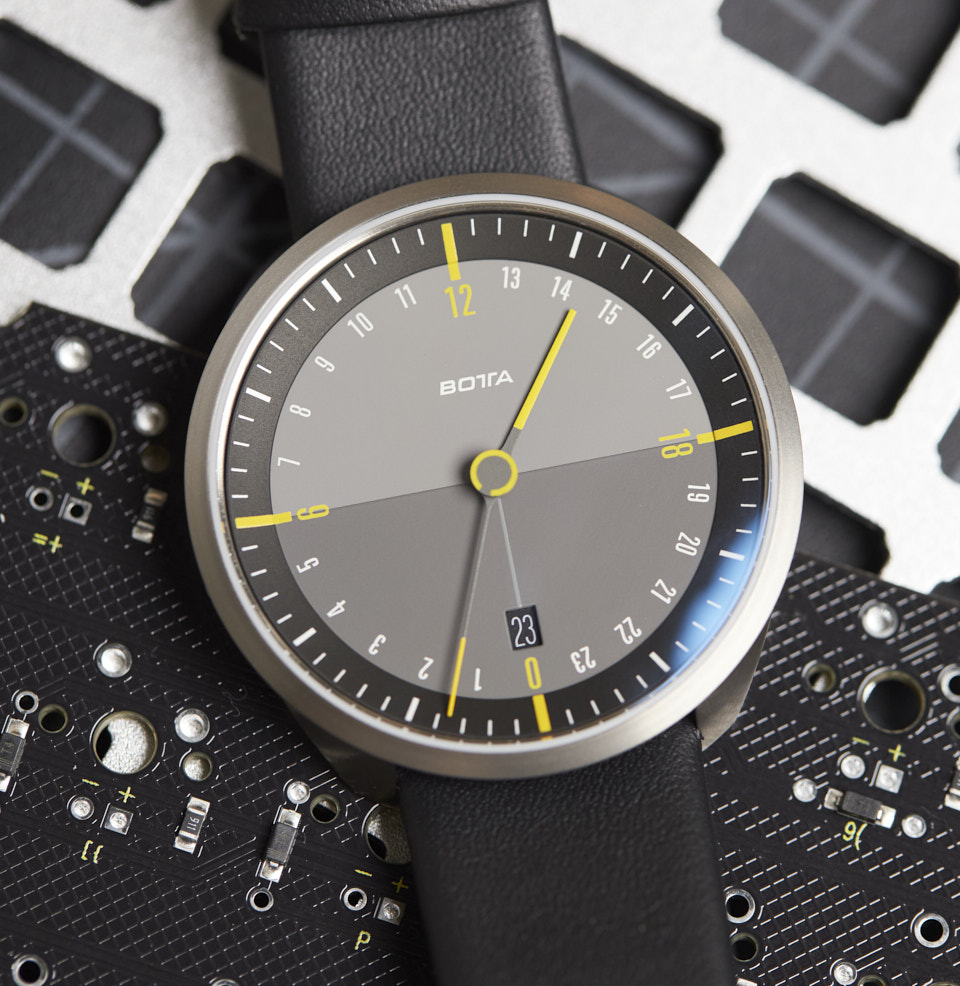 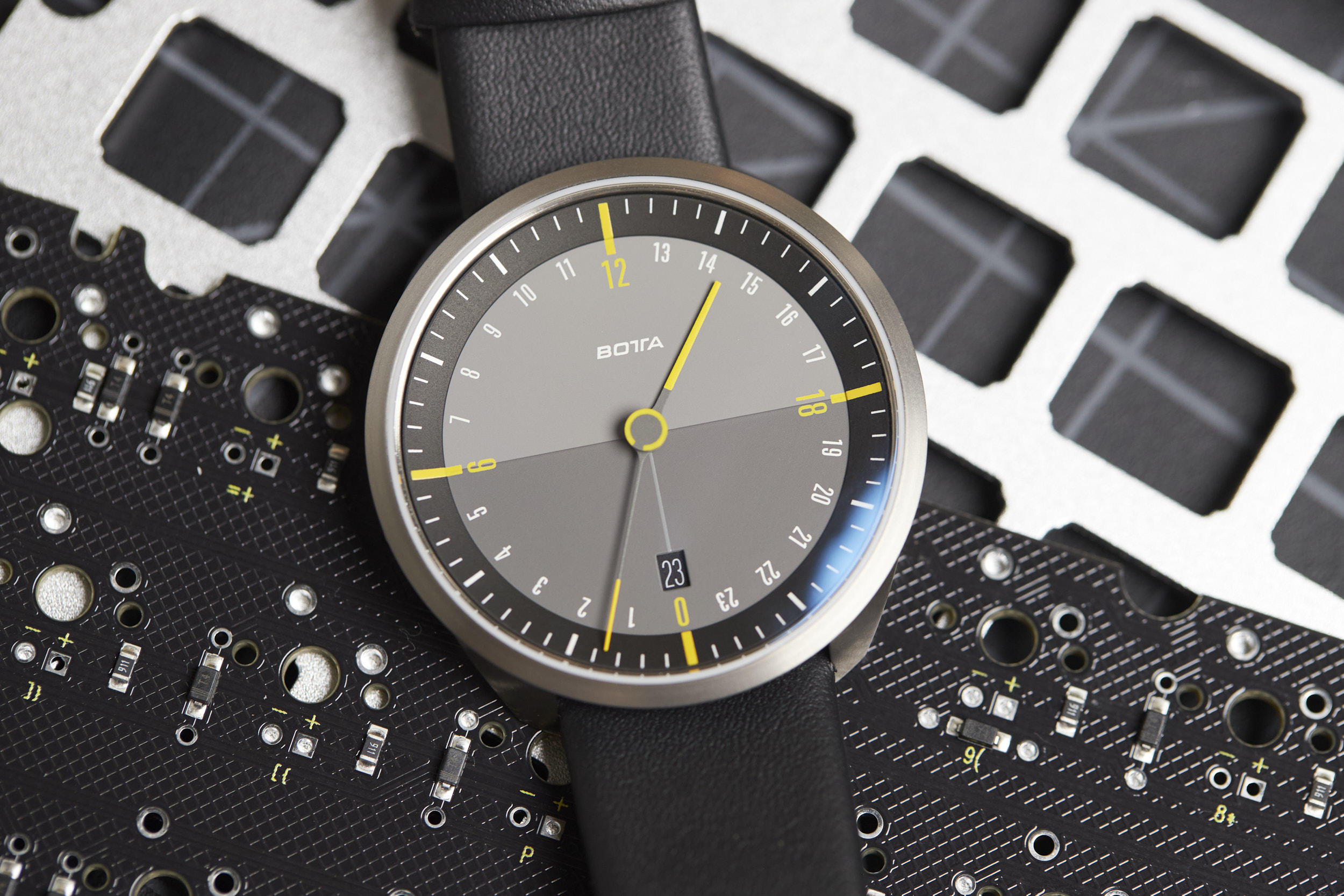 24-hour dial with minutes
The hour is read on a 24-hour scale, while the minutes are read in a traditional manner 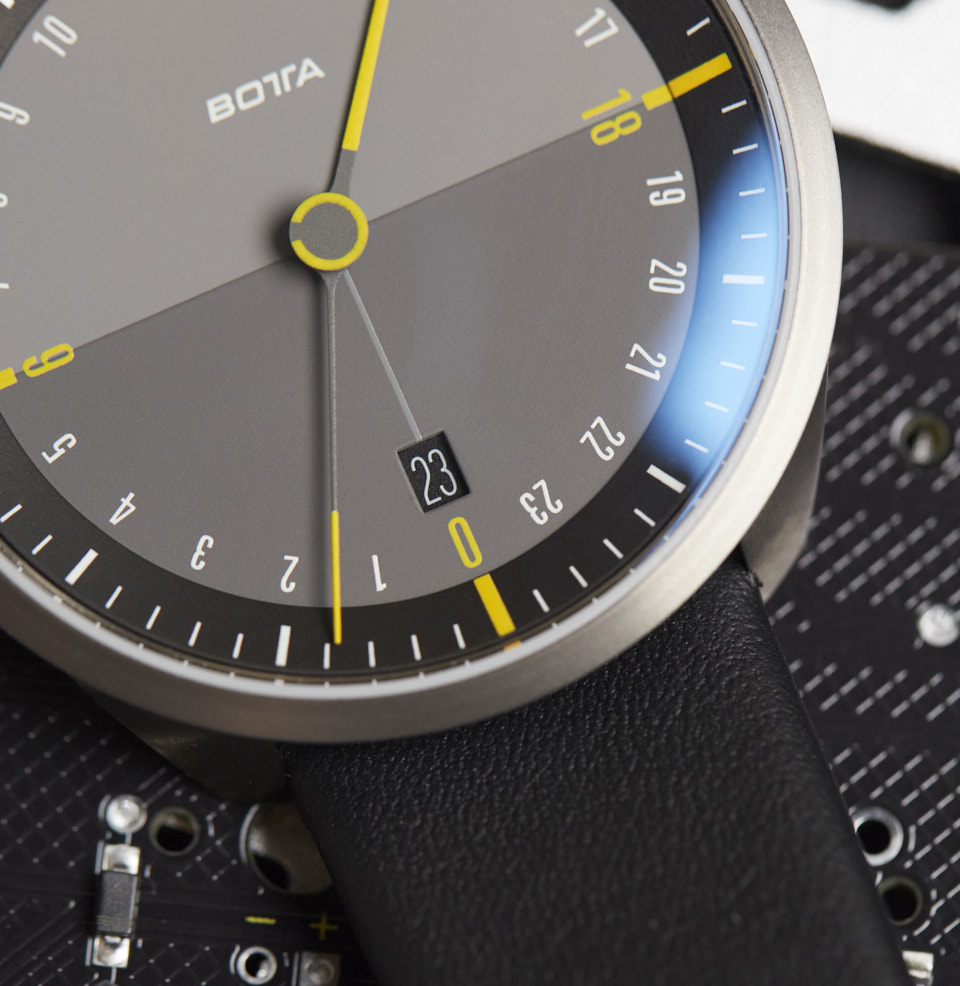 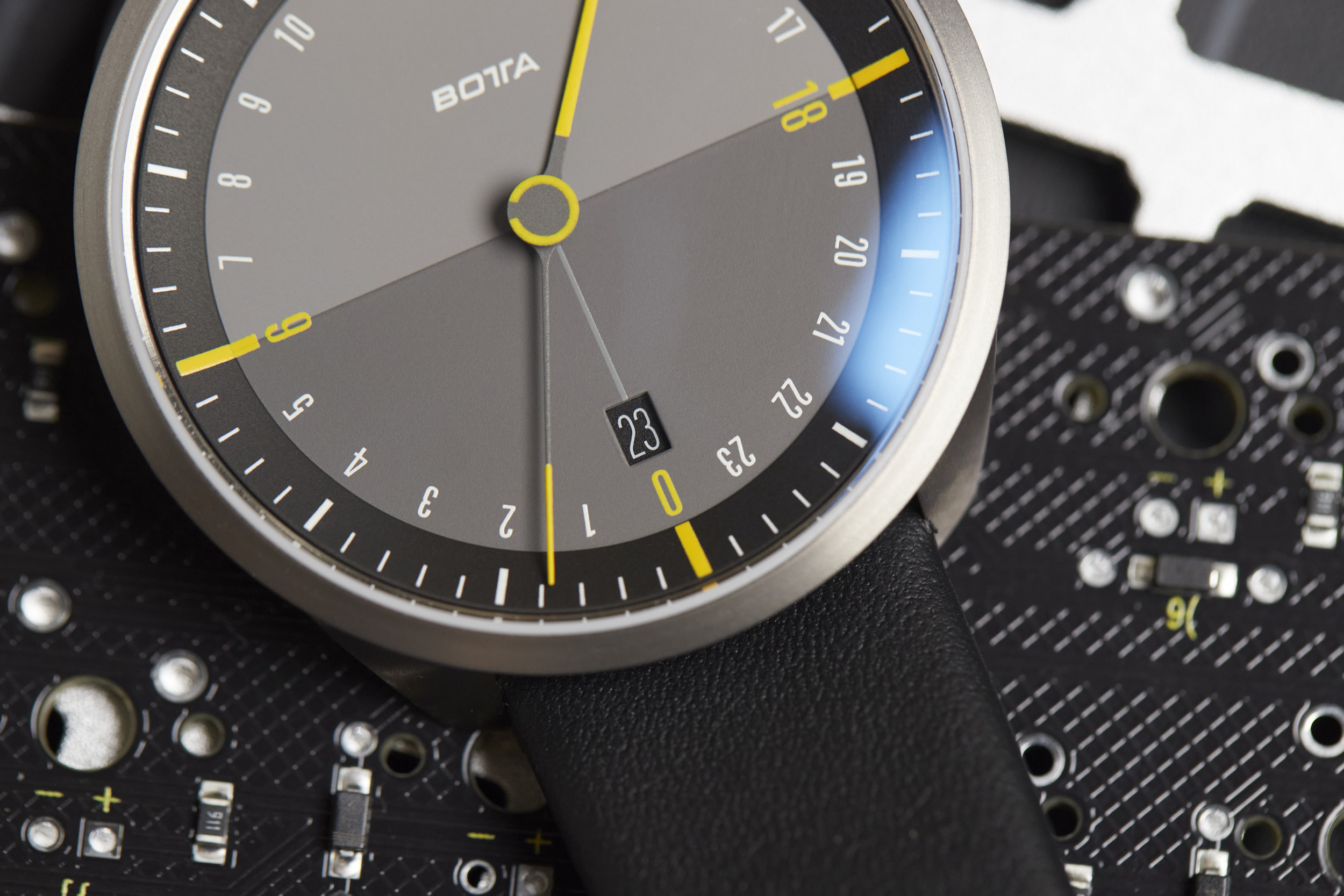 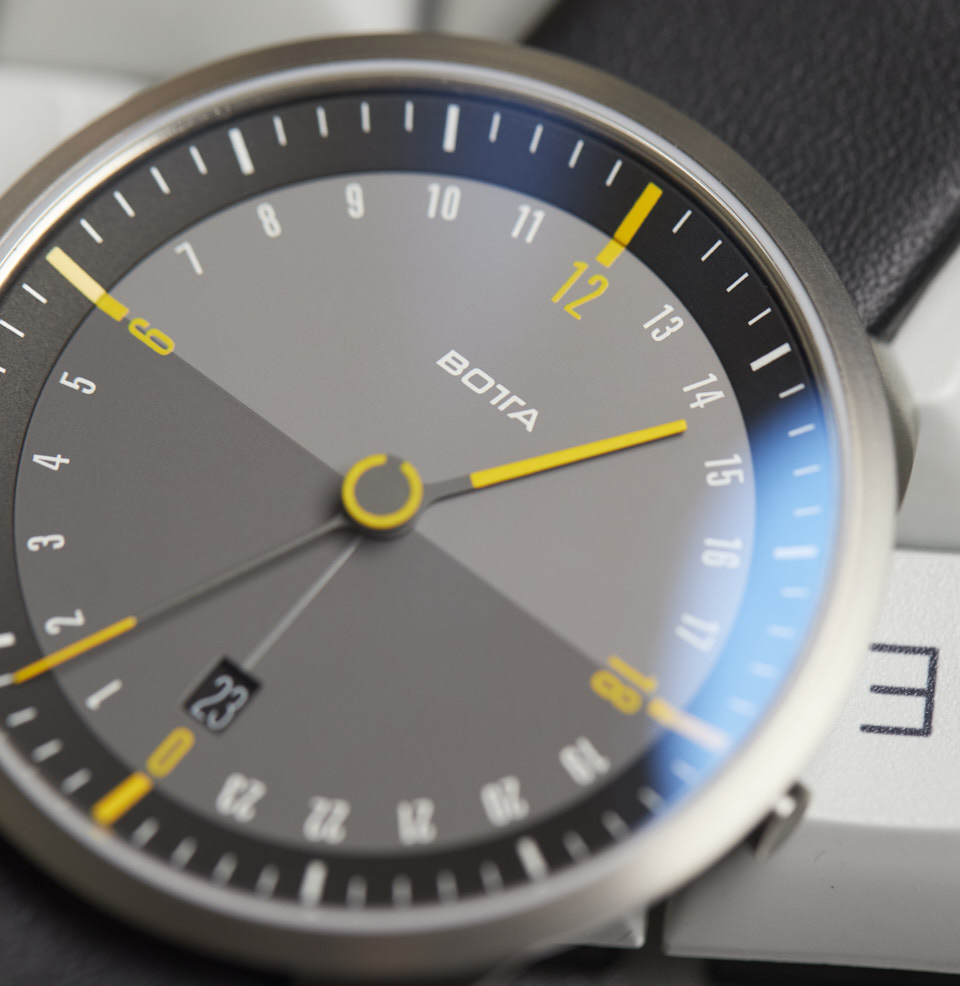 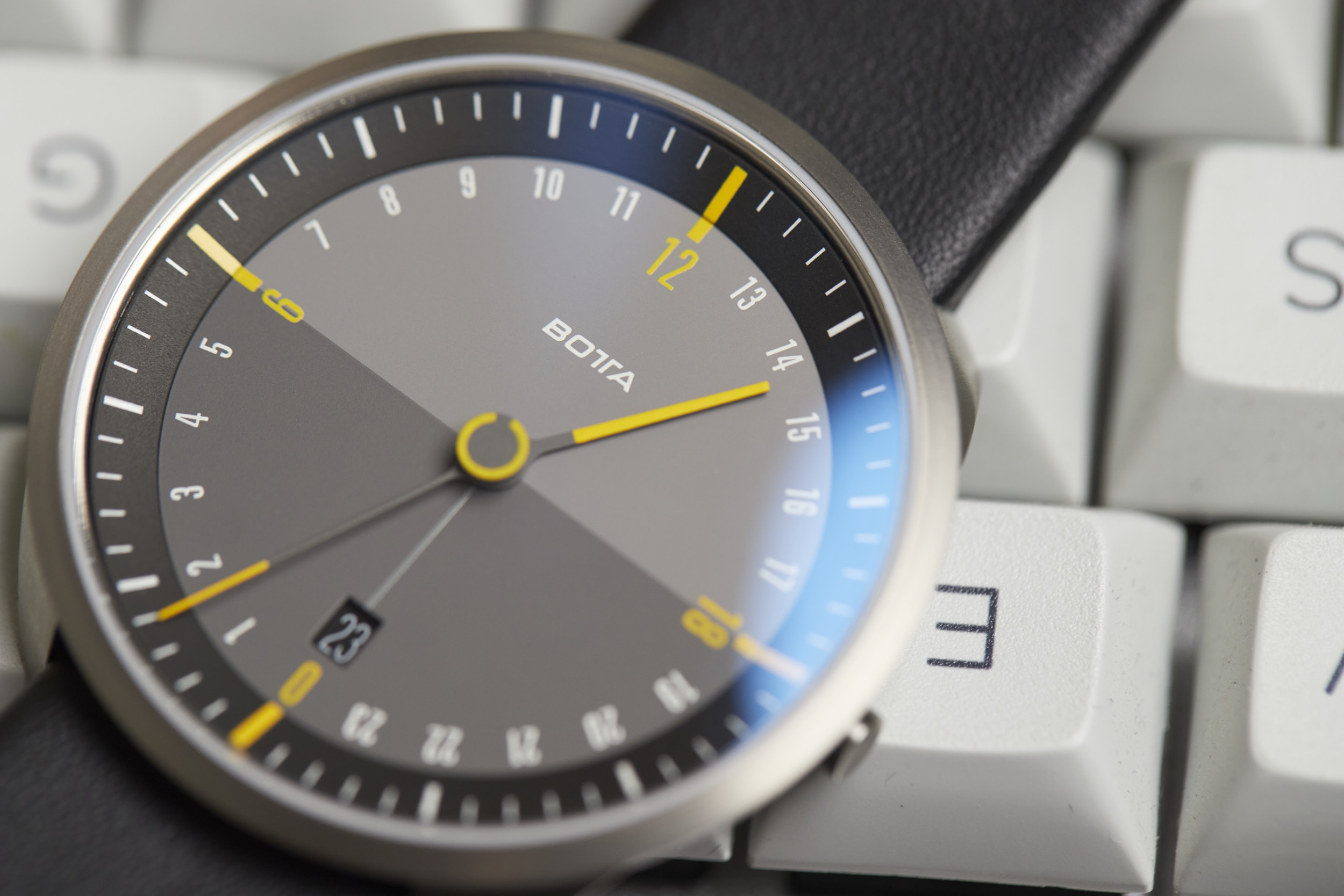 The day on a dial
The split design represents day and night, with the hour hand pointing straight up at noon 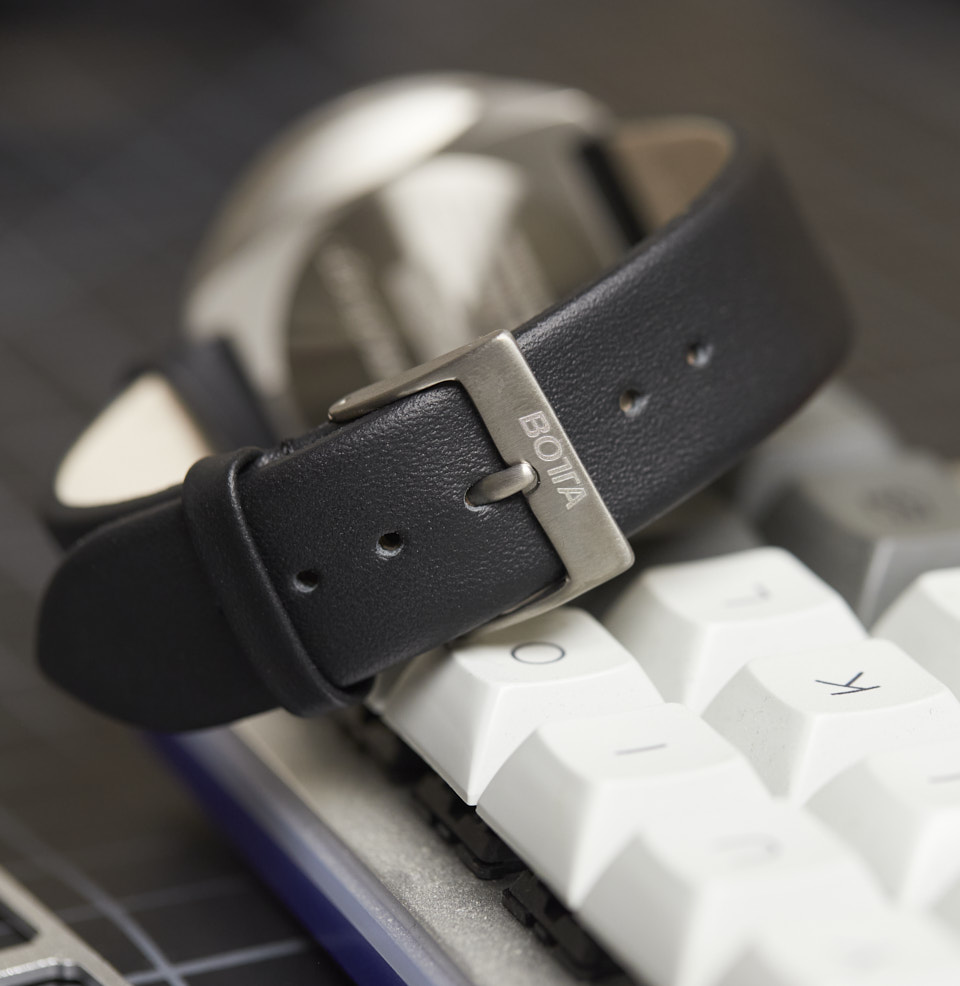 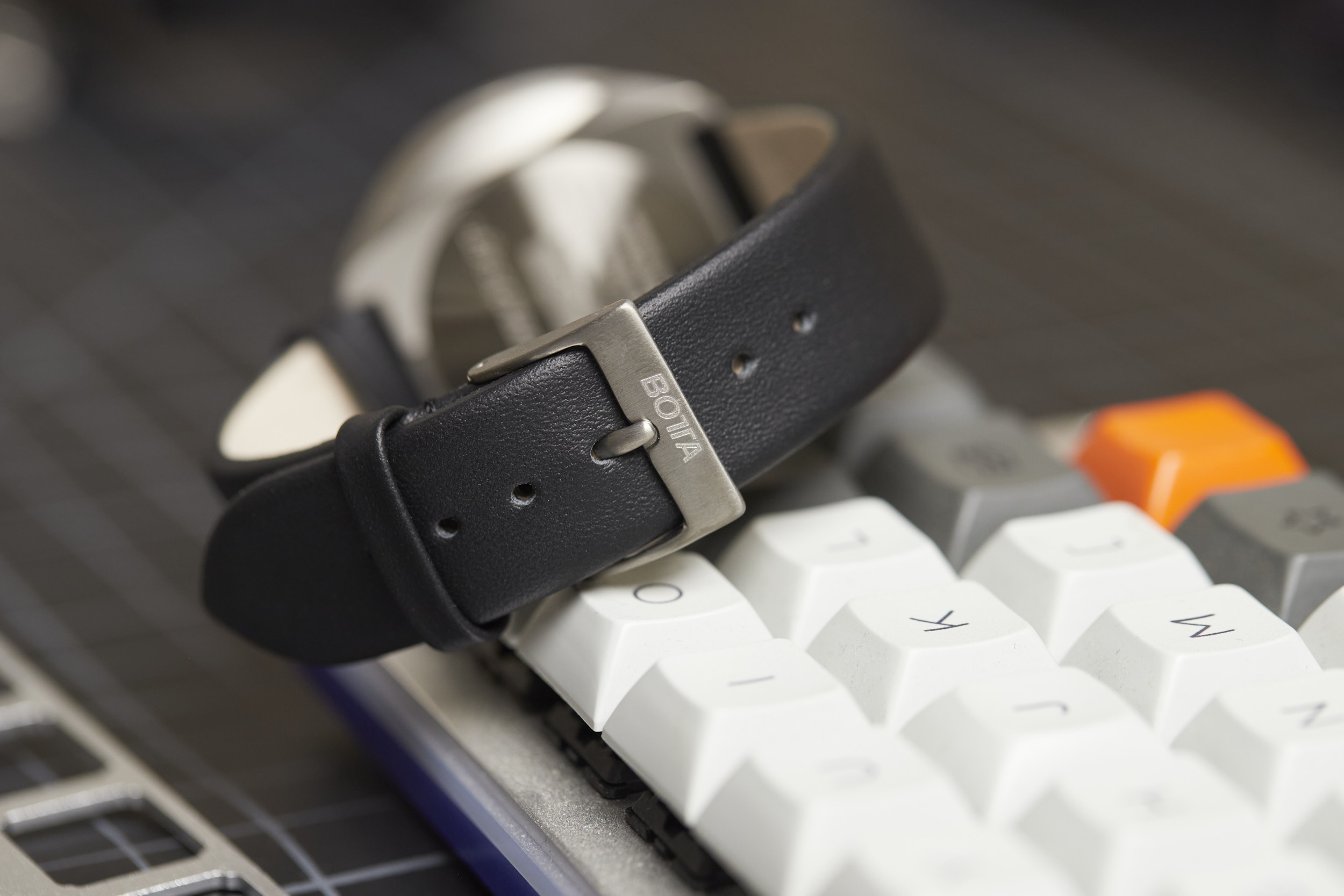 Black leather strap
A simple and clean design
About BOTTA

In 1986 Klaus Botta set out to rethink our perception of time. The result was the UNO, the first one-handed wrist watch of the modern era. With one hand, Klaus found that time was decelerated, allowing for people to live more in the moment. Though still a mainstay of the BOTTA collection of “Time Concepts,” one-handed watches are now joined by those with two, three and four hands, as well as 24-hour dials. Timeless designs with a distinctly modern edge, BOTTA watches mix architectural titanium cases with graphic, highly-legible dials for a unique style. 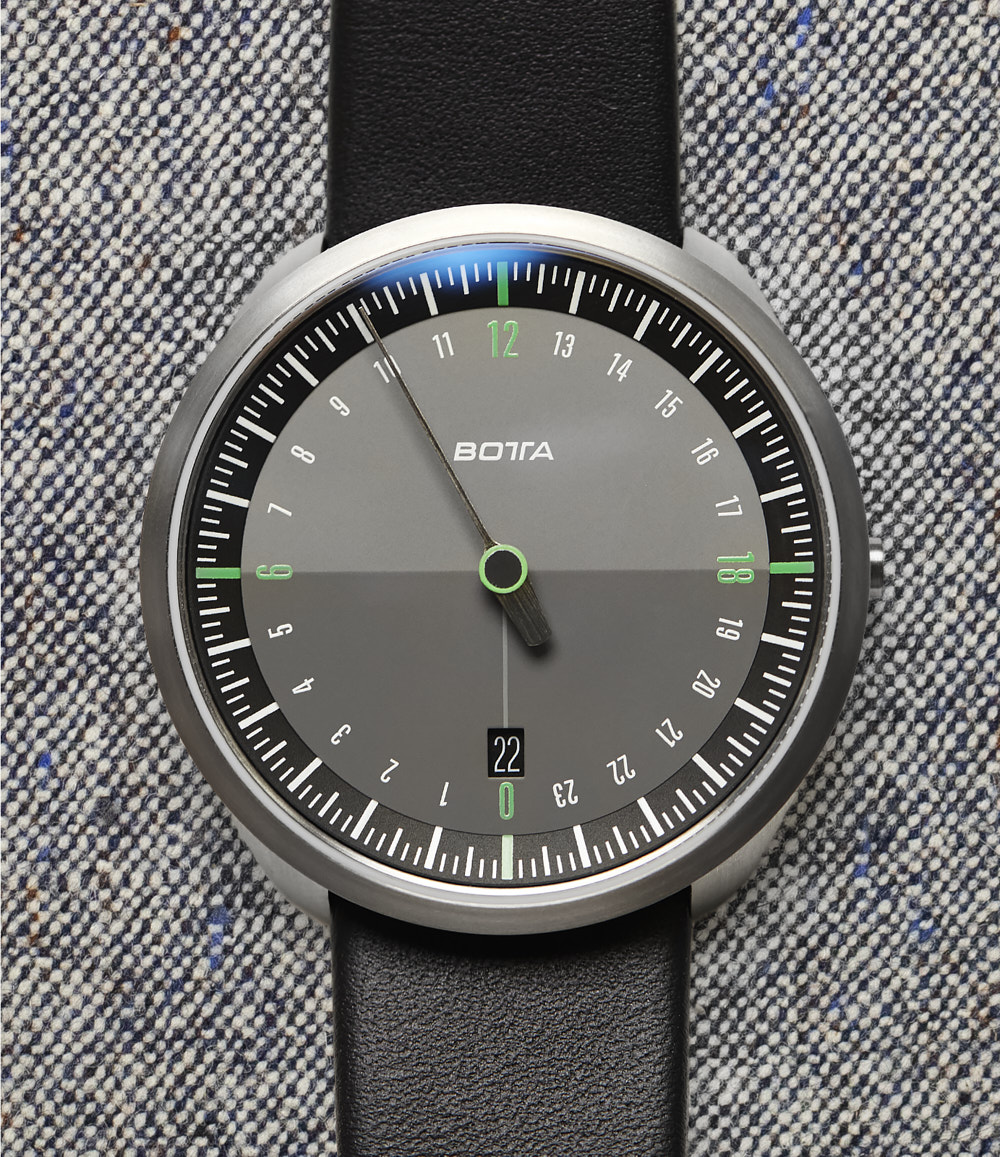 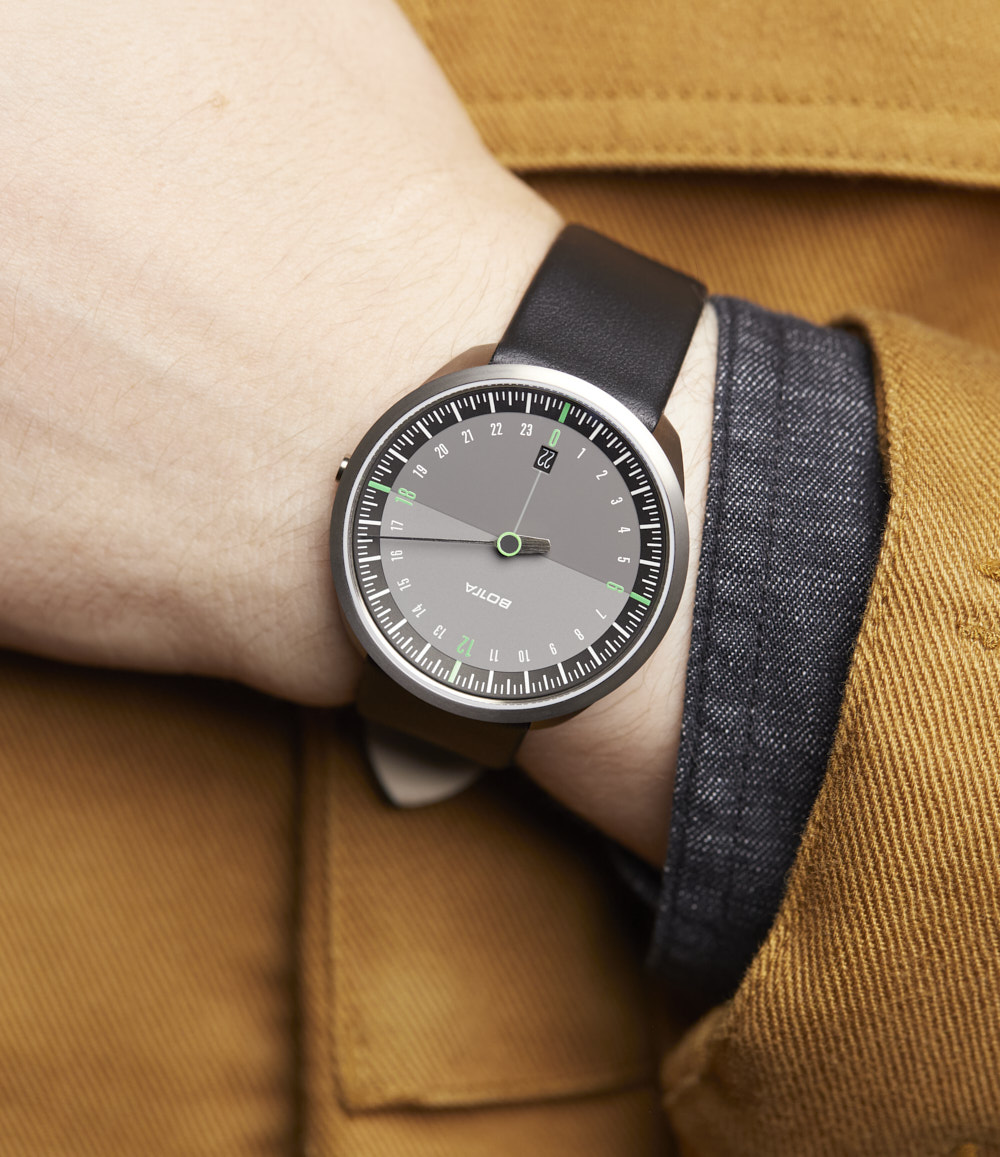 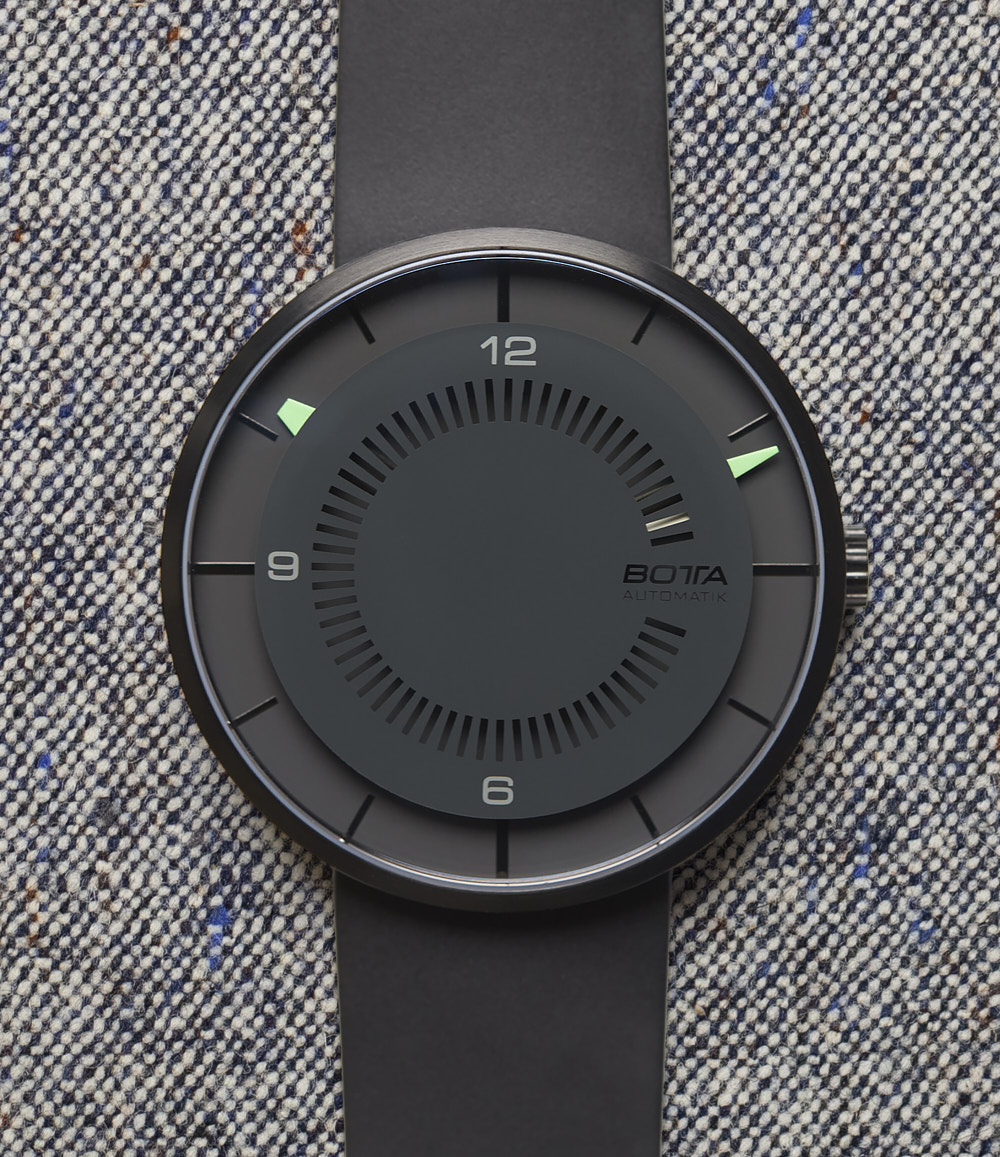 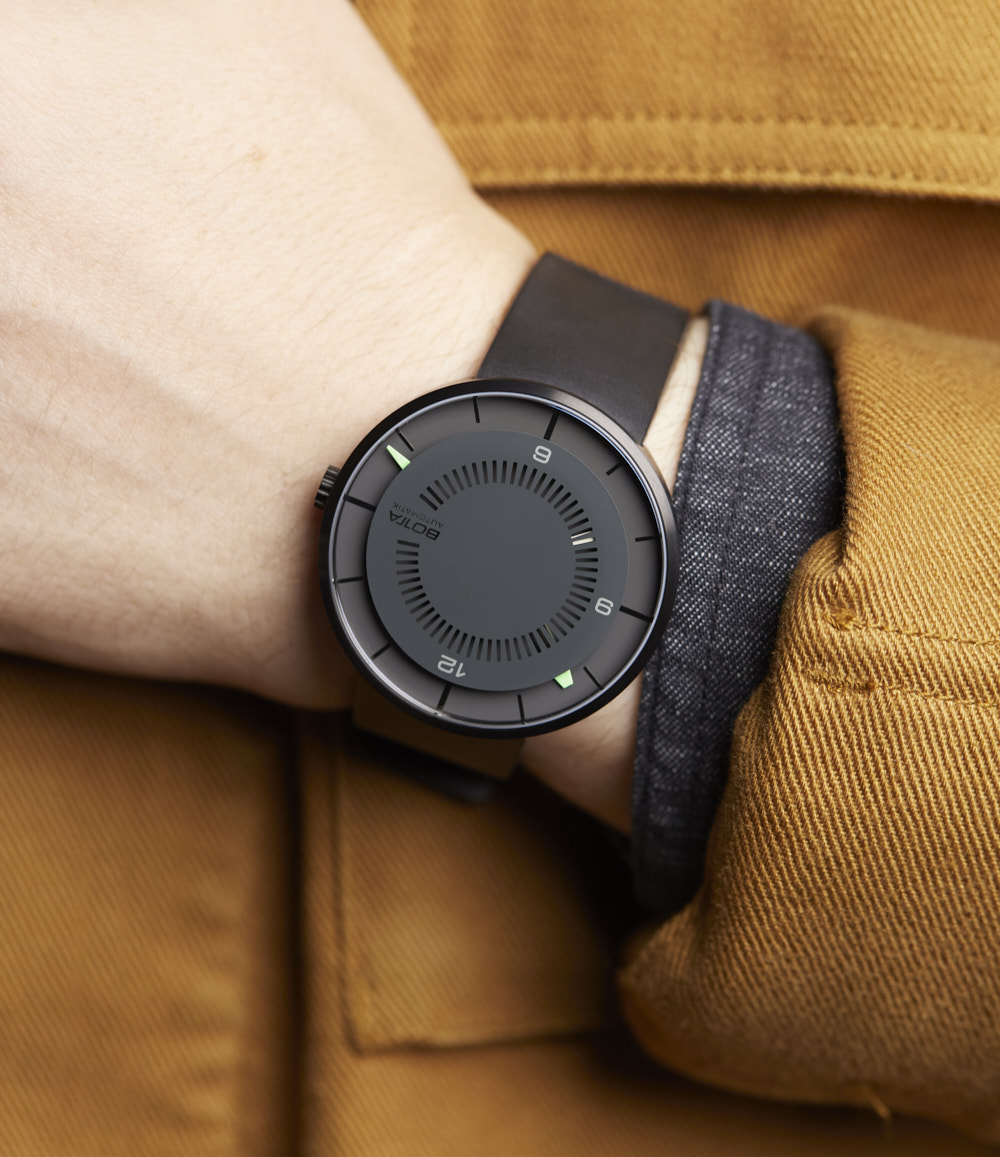 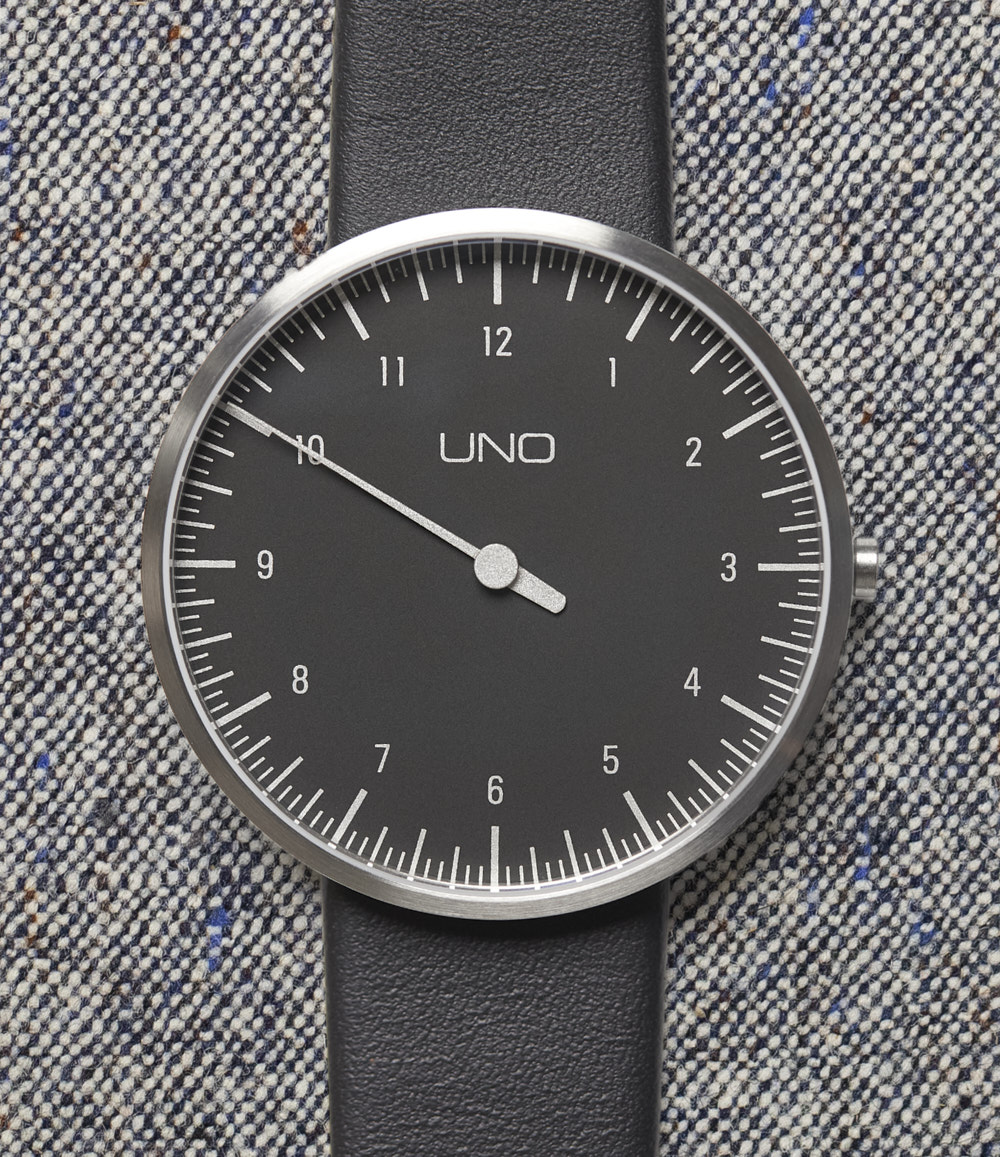 Add To Cart
$535.00
Finish selections for price & availability
Free shipping on orders over $150 in the US
Cart
X
0