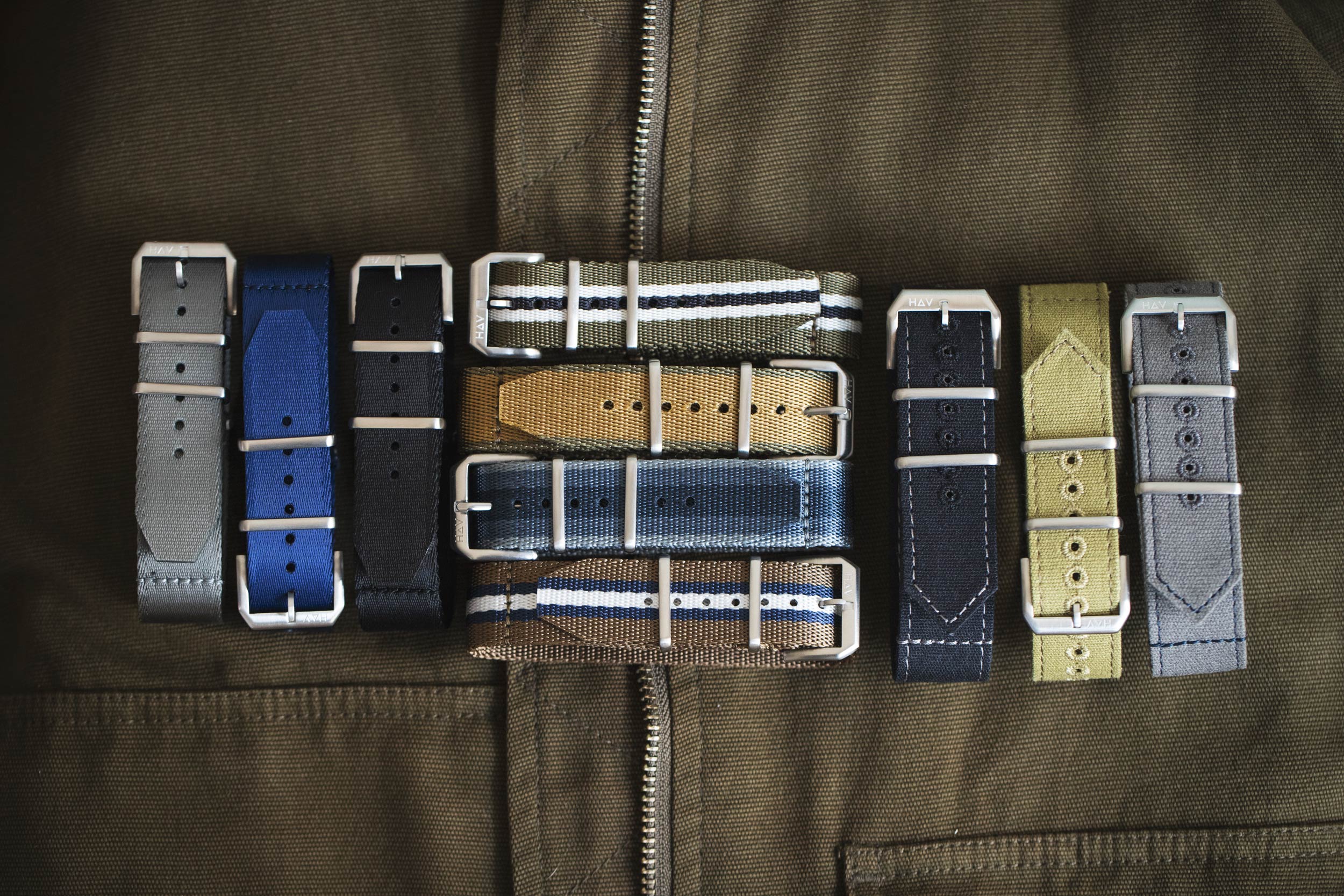 Haveston, the UK-based brand whose motto is “Vintage Military Industrial Design,” is known for their thoroughly crafted and historically accurate watch straps, which come in eye-popping colors and combinations. Alex S., the founder and designer for the brand, originally studied Aerospace Engineering, and even briefly restored wartime typewriters, but found his passion for watches while restoring a 6497 movement.

We spoke here about Alex’s first foray into watches, how Haveston finds their inspiration for new products, and some behind the scenes details on the straps we carry in the Windup Watch Shop. My initial interest in horology stemmed from a general fascination with mechanical objects. I originally studied Aerospace Engineering which can be quite dense and dry, but have always loved history and design in all its forms.

I remember first discovering iconic staples such as the Dirty Dozen, A-11, PAM, B-Uhr and a variation of bold looking Trench watches. Having worked in design, the shapes, spacing and positioning of the numbers all jumped out at me, while the case profiles, lugs and warmly distorted domed crystals screamed out to be experienced and collected. Trying to identify and research the most jaw dropping version within each type soon became a pursuit in itself. Beyond this, the fact that these service watches were primarily built as tools that just happen to look incredible, was, and still is remarkable. Being also issued timepieces, they could, in a modern context, represent the mythical one piece collection, while of course reminding us of the admirable sacrifices made by the generations before us.

What led you to start Haveston?

Haveston started as a result of my journey into watchmaking and design. Like many others in the watch community, I acquired a 6497 movement around which I started to install various dials, hands, case and crowns to create historical military pieces which were out of reach at the time. When it came to the strap, I searched high and low for a pass through design with a layout which made sense, and in a pattern which complemented the Field and Aviation pieces I had built, along with the history they were inspired by. Eventually, I realized I couldn’t find it, because it didn’t exist. So after a long period of prototyping, sampling and testing, the first Invasion A1 strap was launched, followed by the M-1936 A1. Since then, I have applied the same approach to each of our designs. As collectors, we wish a certain design already existed, but it doesn’t so we create it. This is also why our products focus only on specific vintage military designs which by happenstance avoids overlapping with pre-existing popular patterns. There are already so many other great fellow watch strap brands out there, and our own bustling drawing board of prototypes and ongoing iterative improvements already keeps us quite busy.

Can you talk a little bit about the historical research that goes into your products? For example, when it comes to the Service Mil-Strap how did you decide on models like the Roundel '43, or the Sabre A2? What was it about those references (or others) that appealed to you the most?

As you mention each of these patterns, I immediately remember a specific moment of standing in front of the static B-17 in the American Air museum in Duxford, UK (for the Roundel ’43 and Fortress straps), or looking up at the elevated F-86 at Pearl Harbor (for the Sabre strap). Each aircraft design and its mission has such a distinct character which is so well documented in history, documentaries and films. The creation of each pattern results directly from obsessing over each aircraft, and that period of history.

There’s also a fun “secret handshake” element to it. Much in the same way that peering over and noticing a sweeping seconds hand might reveal a fellow watch fan, the iconic Invasion stripes, USN Tri Color Carrier, or even an accurate Frogskin pattern can be appreciated by other vintage military fans. From a technical and design perspective, the combination of tones first needs to be adapted into a linear strap profile which hasn’t been offered before, while achieving a proportion and placement of colors that represents how it appears on the aircraft. Thankfully each color scheme is well documented and is usually the result of a USAAF technical order, or Army-Navy aeronautical Spec no.

The Parade Mil-Strap, with its silky feel and glossy sheen, is one of my favorite straps to use in order to dress up a tool watch. What was the impetus for using the so-called "seat belt" nylon, and how did you settle on the colors you chose?

The Parade line reflects the modern re-interpretation of many iconic tool watch designs which are often reimagined and “reissued” with polished surfaces, beveled edges, and special case materials which are a world away from wartime plated brass. Mirroring the approach found in refined military parade presentation, the Series adopts a much finer weave which is also the only gloss appearance material we have used to date. Being slightly reflective in nature, it can be challenging to achieve an exact dye tone relative to light conditions, but the 5 main models we hold now reflect the core military tones which we have established from endless rounds of dye tests when originally developing the Service Series range.

Can you tell us a little more about the inspiration behind the Corp Canvas Mil-Straps, and their vintage military look?

The Corp. Canvas range came about when I completed the restoration of a 1943 USAAF issued A-11 which has a relatively obscure 16mm lug size. Having acquired and followed a 1945 dated TM 9-1575 manual (US War Dept technical manual for watches), I decided to go all the way and source an authentic wartime NOS olive canvas strap. When it arrived, unfurling it from it’s stamped mounting card for the first time was quite an experience. Knowing that someone in the wartime production system had sewn it together and packaged it over 70 years ago, and here I was taking it out! It’s a presentation and packaging experience I’ve often referred back to. As some customers may have noticed, packaging has also been quite an obsession, and the mounting card itself went on to closely inspire paper components, while the general monotone illustrative style of print continues as a theme today.

Jumping back to the subject of wartime production, it can also be quite apparent that equipment specifications back then were mere guidelines. For items such as canvas equipment, stitch alignment, exact tone, or even basic symmetry was often an afterthought, after all there was a war on! The wrist sizes were also quite dramatically smaller too. Feeling a bit guilty wearing a WWII canvas specimen, we set out to make a modern sized version based on our A2 single pass floating keeper layout, while featuring stitch reinforced hole settings and a triangular tip, just like the original. As the wartime straps had no exact tone specification, we based the first models on the 1940s evolutions of Olive Drab US field equipment (which also covers what we think of Khaki nowadays). Since then, the range has grown to include other vintage military staple tones, and more recently has come full circle with an expanding range of 16mm size models.

Why do you think so many people are still drawn to the period's style today?

I’ve always felt that the memory of an event can be more significant than the moment itself. With history, we have had the time and space to look back at events and endlessly explore, understand and celebrate them. It becomes a finite world where we can seek and find answers. History to me is; learning from the past, to bring the best of it into the future. Like learning from the “greatest generation,” it allows us to define core principles of character and believe in, and aspire to an ideal. While I'm almost certainly never going into outer space, the HAV-IVA Strap is one of my favorite fun straps to wear. Have any billionaires reached out to you about using one to take on their rocket ship voyages?

Haha, not yet! But it has initiated some interesting conversations, while coincidently being a perfect strap to dive with. It’s quite an unconventional design and makes quite a bold “mission tool” statement.

On a related note, I have a large Saturn V model on my desk, and it reminds me daily that going to the moon was an absolutely ridiculously ludicrous idea. Yet by breaking down an impossible task, you can effectively sit yourself atop an adapted ballistic missile, incrementally work your way up to orbit, learn to dock, achieve lunar orbit etc, and go all the way to the Moon, and then likely yearn for Mars afterwards. But most importantly - all in iterative stages. Even the Saturn rocket has stages within itself, with the early stages fighting the most gravity. This, fuelled by the perseverance, dedication and drive of the engineering teams and astronauts is truly inspiring. So although we don’t know of any IVAs making it to space just yet, I’d like to think people who have worn it, or our other designs, have achieved great endeavors on their own personal missions!

(This interview was conducted over email and edited for length). 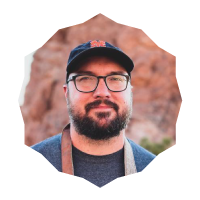 For over a decade, Justin has publicized everything from mystery novels and independent films, to non-profit organizations, art gallery openings, and mechanical watches. His writing has appeared in Worn & Wound, Eephus, and Impose Magazine. On his wrist, you’ll often find a well-worn Seiko SKX-007 with an ADPT strap, or his grandfather’s Bulova Accutron.